The Lamborghini Huracan doesn’t need an introduction. But still, it’s here to fill the erstwhile Gallardo’s shoes and has already been launched in India for a cool  INR 3.43 crore (ex-showroom, Delhi). The banshee V10 stays albeit with power updates( 610 PS of power at 8,250 rpm and 560 Nm of torque at a high 6,500 rpm), but new is the clean chit design and a dual clutch transmission amongst other things. 0 to 60 mph is dispatched in a mere 3.2 seconds, and the new baby Lambo pulls cleanly till 325 km/h. 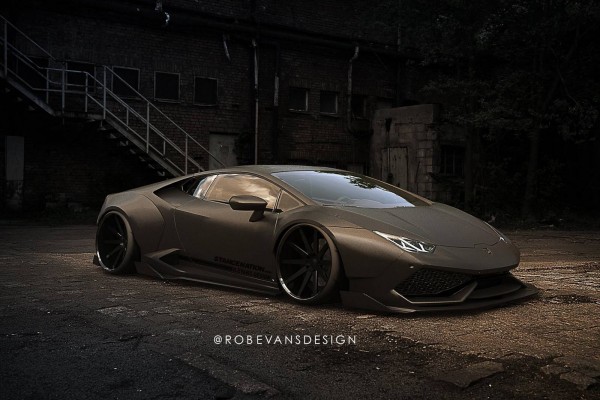 Nobody says that the Huracan looks ho-hum, but that doesn’t stop people trying to better it- at least digitally. Featured here are a couple of jaw dropping renders from Robs Evans Design imagining the Huracan with a wide body kit, some aero upgrades and that stance! And it’s going to be all blacked out, because it just looks killer, especially with the jet fighters resting in the background. 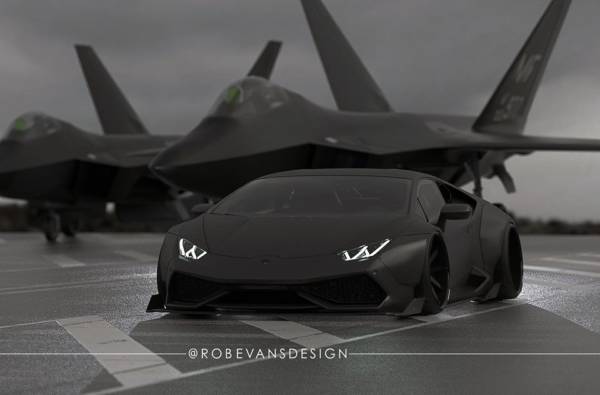 These renders try to whip up a Liberty Walk/LB Performance kit, especially with the trademark rivets on the flared arches. You can take a peek of the LB Performance Aventador here. Though the kamikaze Japanese tuners haven’t announced their take on the Huracan yet, but if these renders mean something, it’ll pack an enormous visual punch!