Many people like to have something unique about their vehicle but some end up doing do-it yourself (DIY) modifications which steal the real beauty out of the vehicle. Luckily though, there are aftermarket specialists who professionally restyle vehicles making them more appealing that before.

One such aftermarket specialist is Vilner. The company has been in existence for over a decade now and has been cosmetically modifying cars from different segments. The latest design out of its stable is a yellow Hummer H2 which received a Chinese dragon theme. 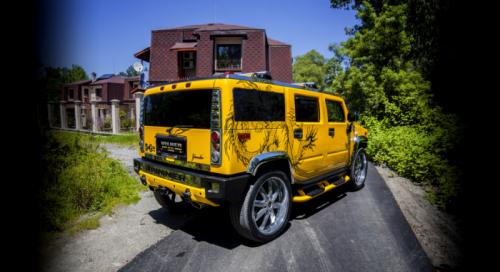 This customised Hummer H2 rides on 26-inch chrome alloy wheels and wears a yellow body paint featuring Chinese dragon design. The door handles, front grille and bumper, get chrome finishing. The wheel arches and also on the rear bumper and above the taillights are blinged with chrome..

The dragon theme also marks its presence on the inside as the leather-wrapped door handles and LED lighting for the dials have a yellow background. Same colour was used for the seat belts while the door pockets have also been covered in leather. 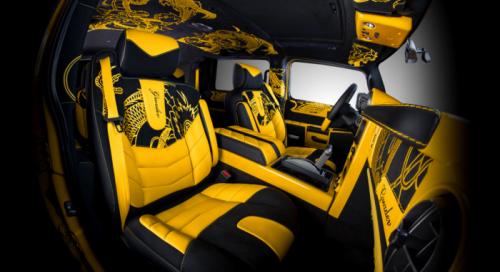 The Hummer H2 is a downsized variant of the Hummer H1 which was inspired by High Mobility Multipurpose Wheeled Vehicle (HMMWV), commonly known as the Humvee. Humvee is a four-wheel driven military automobile. Compared to the H1, the Hummer H2 is longer, lighter and roomier with accommodation for six, and in some models seven people. Discontinued in 2009, the Hummer H2 sported a 6.3-litre V8 engine that produced about 393 bhp. This power propelled the Hummer H2 from 0-100kph in about 10 seconds.

The Hummer H2 was replaced by Hummer H3 in 2009. However, the company closed its operations in April 2010.