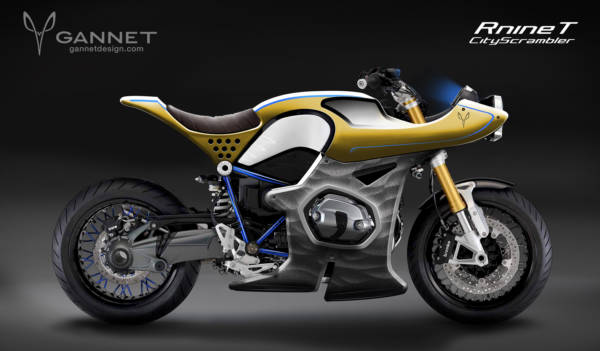 Following yesterday’s feature on the Gannet Design Café Fighter, today we have one of his more vibrant creations- the City Scrambler. The design started with the cool BMW R nine T, a retro modern café racer with loads of room for customization from the factory itself.

Gannet says that the idea follows a reverse process- the originally retro theme of the nine T has been scrapped, and they’ve gone for a more contemporary approach which includes a new upper fairing that encompasses the headlamp as well, unleashing a modern scrambler. The City Scrambler will run a solo seat configuration.

The interesting bit is the lower fairing, with its undulating surface treatment and holes for the Boxer twin cylinders to poke their heads out. Gannet says it mimics granite, especially with the texture and the undulations, although the jury is still out on that one. Information on the materials and other details are limited, but the R nine T City Scrambler promises to be a different build with a unique theme.

Check the gallery below for other color options.