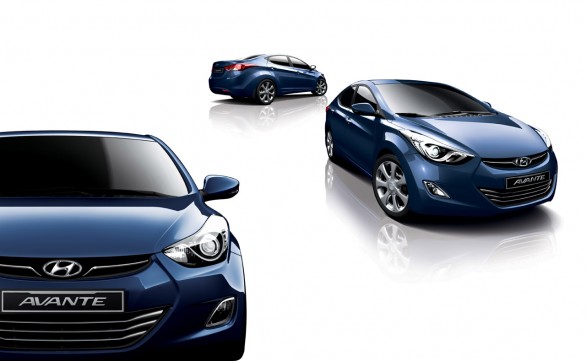 We have been keeping you updated about the developments regarding the India bound Hyundai Elantraantra is one of the most beautiful creations by the Korean firm in recent times. The company has also released a dynamic video of the car and the machine look absolutely poetic in motion.. We also showed you a video of the car when it was shown at the Busan Auto Show. Now Hyundai has launched its sizzling hot Avante in South Korea. The Avante which is slated to make an entry into the Indian market in 2011 has the goods to become a global hot-seller, just like its predecessor.  The new Avante is going to substantiate the fact that the design prowess exhibited by the Korean company with the new Sonata wasn’t a fluke and after years of copying Japanese and European designs, the company has finally managed to find its own design philosophy which is fresh, functional and beautiful.

By whatever little we have managed to learn from the news on various different blogs, the new Avante, or the Elantra for India, will be launched here early-mid 2011 and will give the Civics and cruzes of a world a very good run for their money.

Page 1 of 3. Go to next page for the video of this stunning car

Page 2 of 3. Go to next page for full details, features, engine options and image gallery of the 2011 Elantra

Under the bonnet of the Avante / Elantra is a spanking new direct injection 1.6-litre petrol engine, christened 1.6 GDI (Gasoline Direct Engine) by Hyundai. Dishing out close to 140PS (16 more than the previous version) of power and 175 Nm of torque this engine looks both exciting and practical at the same time. A 6-speed manual transmission takes the power from the crank to the wheel – and returning a Hyundai claimed 17km to the litre.  There is also an automatic option, but it won’t be as exciting or as fuel efficient as the manual tranny, for obvious reasons.

Price wise, the new Avante will cost 13.4 million won to 18.4 million won in South Korea, which is equal to 5.2 lakh to 7.2 lakh rupees in India. Obviously, the car won’t retail for such a low price in India with added duties and transport overheads. We are expecting a 10+ lakh price tag for the base model.

Hyundai have not confiremed any more engine options for the car yet. There were options of a 2.0-litre petrol or diesel engines for the current generation Avahte, but they were discontinued because of a lack of demand. We hope the car has a refined, efficient and modern diesel option when it sets foot in India.