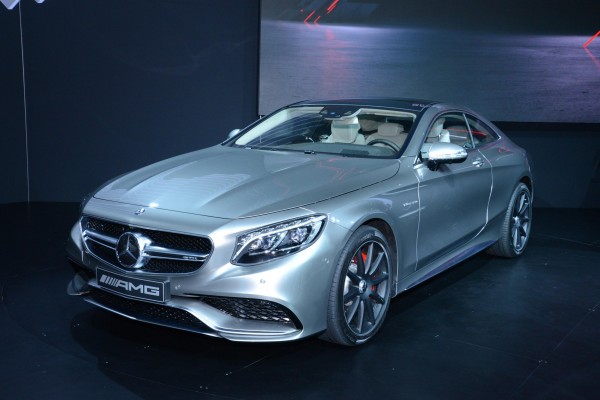 Darkness and poetry come together in the new video spot that Mercedes-Benz has just released for the new S63 AMG Coupe. Shot mostly in black and white and under heavy artificial smokescreens, the video is accompanied by a poem penned exclusively for AMG by a Betty Stewart. It is all a bit too Jaguar-like, with constant references to the S63’s cat-like power and agility, and the narrator kind of reminds you of Vincent Price from Michael Jackson’s Thriller video.

The 2015 Mercedes-Benz S63 AMG Coupe is powered by the twin-turbo 5.5 litre V8 from its predecessor, the CL63 AMG. With 580 PS, the direct-injection gasoline unit kicks out 40 PS more than the CL63 AMG did in standard guise (or 14 PS more than the CL63 AMG equipped with the earlier performance package option, which is no longer offered). Torque remains the same as before, a tree-uprooting 900 Nm at 2,250 pm.

A seven-speed AMG Speedshift automatic gearbox offers three driving modes as well as a stop/start function for added fuel savings in urban driving conditions. As with the CL63 AMG, the new S63 AMG Coupe will be available in both standard rear-wheel drive and optional 4Matic four-wheel drive guises. The rear-wheel drive S63 AMG Coupe is claimed to hit 100 kmph from standstill in 4.3 seconds — a mere 0.1 second faster than the CL63 AMG. But it is the four-wheel drive S63 AMG Coupe 4Matic that takes the performance honors thanks to its superior off-the-line traction, with an official time that is 0.4 second faster than the performance-packaged equipped CL63 AMG at just 3.9 seconds.

Guess that feline poetry voiceover wasn’t that wrong, in hindsight.