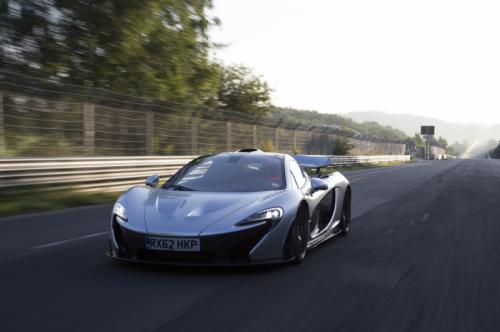 Earlier today, we reported that the McLaren P1 has lapped the Nurburgring circuit in less than sevent minutes, thereby entering the list of elite few to have achieved this mean feat. Now, McLaren has released a video of the P1 lapping the Nürburgring Nordschleife.

It isn’t yet known if the P1 has beaten the Porsche 918 Spyder’s lap time of 6 minutes and 57 seconds. However, the company has said that thanks to lapping the ‘ring in less than seven minutes, the P1 has “achieved its one remaining performance target“

Commenting on the sub-seven achievement by the McLaren P1™, McLaren Formula 1™ driver and 2009 world champion Jenson Button said: ‘The fact that the McLaren P1™ has posted a sub-seven-minute lap at the Nürburgring is unbelievably impressive. I’ve been an F1 driver for 14 years, and I’ve driven more than 240 Grands Prix and, although I’ve never raced an F1 car on the Nürburgring-Nordschleife circuit, because the last time the German Grand Prix was held there was before I was born, I know exactly how challenging, and daunting, a racetrack it is. Over the past dozen-or-so years I’ve owned a lot of ultra-high-performance road cars. I’ve driven the McLaren P1 on a number of occasions – including up the hill at the Goodwood Festival of Speed, where it was sensational – and I think it’s a truly superb machine: unbelievably refined yet unbelievably quick.

But, as I say, for it to have recorded a sub-seven minute lap time around the Nürburgring is the icing on the cake: proof positive, backed by hard data, on the greatest racetrack of them all, that McLaren has created a genuine game-changer.’