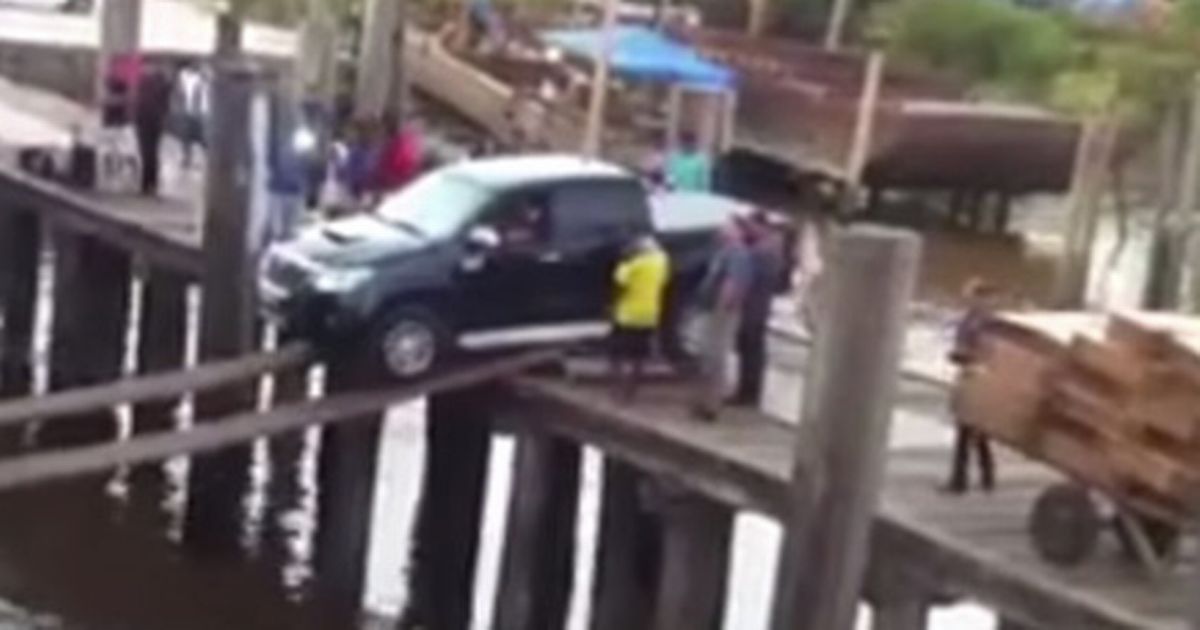 Hold onto your seats. This is one of those moments where you literally stop breathing as you stare at the screen, daring not to blink lest you miss that crucial moment when it all inevitably comes crashing down.

This short video is from a lesser developed region from the world where the absence of the latest Caterpillars and Hitachis mean that people has to resort to ingenious ways to accomplish their loading needs. Judging by the language – we did a little poking around too – it seems to be somewhere in South Africa and they’re speaking Brazilian/Portuguese.

Anyways, it shows a pickup truck (or Ute, as they call it in Australia) being loaded into a ship. Now ships are loaded onto ships all the time. But here, they are going about it the old fashioned way; with wood and nerves of steel. Forget about safety first or high tech cranes and hoists, to get the truck from the dock to the ship they plan on driving it over two long wooden planks. The truck tires barely seem to fit on the width of the planks and my guess is that they’d snap under the weight.

Whoever agreed to drive the truck across must be crazy, or really know what they’re doing. Seriously, do they know some law of physics that applies to this sketchy situation? If they do snap it means a long scary fall into the murky brown water below.  Everyone watching, from the people on the dock to those filming aboard the ship, sound nervous and skeptical. A man in a yellow shirt appears to talk to the driver, perhaps he’s trying to talk him out of it, or he is directing the stunt. Girls can be heard screaming in the background and they are understandably nervous at the sight of it all.

Edging forward, the driver slowly attempts to navigate across the planks. Reaching half way, the driver appears to slow down despite the wood appearing to be close to breaking point over the calm waters. It is unclear how many frightened passengers were inside the pickup truck as the crossing was attempted. The driver continues to drive despite having little or no visual grasp of how close the truck is to falling in the water. Moments later the truck continues forward and makes it over the bridge and onto the ship. Cue a sigh of relief and cheers everywhere.

Okay, leave that precarious loading scene for a moment now. And answer me this, how exactly did the truck made that turn from the jetty to the planks of wood? It couldn’t have taken a short time, that’s for sure. Or, did they just lift it and put it sideways? We will never know.