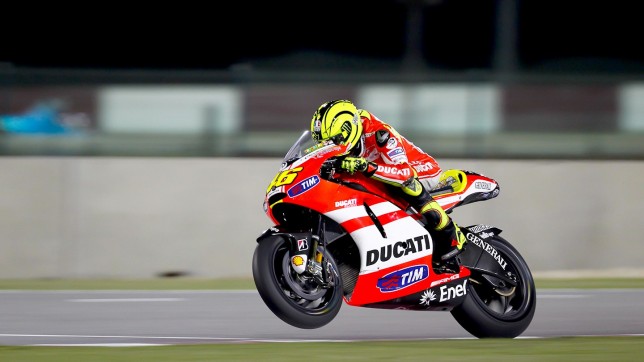 Valentino Rossi is struggling with his hurt injured shoulder, as well as with the dynamics of his Desmosedici. The iconic racer finished in 13th place at the end of the pre-season testing. Rossi has managed to be eighth overall throughout the testing season. Rossi has been suffering crashes, which is not a good sign, and an indication of the fact that he is not very comfortable with the bike. The Italian rider fell down twice from his bike, of which once he slipped on a white line which doesn’t offer enough traction.

The Doctor is finding it difficult to make the Desmo turn with his recuperating shoulder which is not strong enough. Rossi’s best was 1.307 seconds behind Casey Stoner. The #46 racer admitted that he was not able to push hard enough from his shoulder. He kept losing a tenth of second lap after lap.

MotoGP 2011’s first race is about to begin next weekend, and Rossi doesn’t look too confident about his shoulder, and his ride. He has admitted that there is a lot of work that needs to be done with the bike as well as his shoulder.
Hayden was the ninth fastest, but we’re quite sure you won’t be interested much in knowing how he managed it. We’ll be back as soon as we hear a little more from the Doctor. Here are the final testing results