American car maker Chevrolet has released a teaser pic of the 2015 Corvette Z06. This teaser image confirms that the spy shots of a high-performance Stingray were in fact of the new Z06. The Corvette Stingray Convertible goes on sale this month, while this Z06 will debut at the Detroit Motor Show in January.

There are no powertrain or chassis details available at the moment, but it is clear that the new Z06 will follow the trend of being lighter, stiffer and more powerful than the base variant ‘Vette. Visible in the teaser image is the low-profile Michelin tyres, as well as carbon-fiber side skirt and fender-flare extensions. 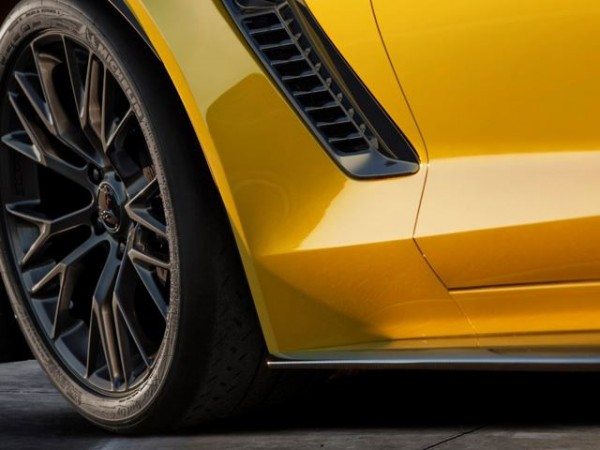 Also, there will an upgrade upon the performance of the current Z06, which delivers around 500 hp from its 7.0-liter V8. Rumors suggest a V8 in the new Z06 will be either a twin-turbo 4.5-liter unit, or normally aspirated 6.2- and 7.0-liter engines. Chevy also has a 6.2-liter supercharged V8, but that’s likely to be reserved for the next-gen ZR1. Since the Stingray prices start from USD 63,ooo, the Z06 is expected to be priced around USD 80,000.

GM says the car will be “the most track-capable Corvette ever, designed to deliver supercar levels of performance through unique powertrain, chassis and aerodynamic features.”

The earlier rumors of this Corvette being dubbed as the Z07 have been put to an end with the release of this teaser.

Following its unveiling in Detroit, the 2015 Z06 will enter into production in late 2014.

Stay tuned to Motoroids for more dope on the upcoming 2015 Chevy Corvette z06.