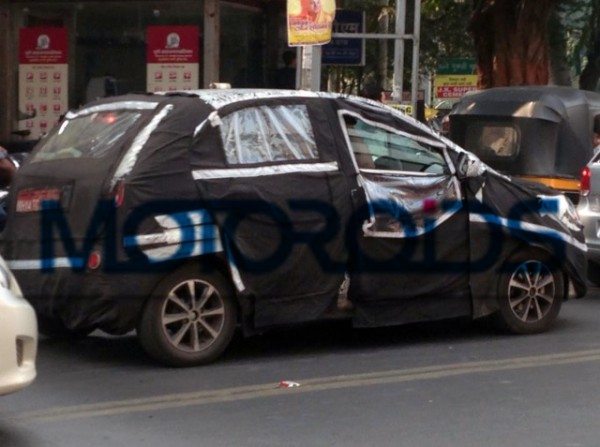 The 2014 Tata Vista facelift has been spotted again and the latest spy pic of the upcoming model comes from our friend and reader Aamir Bankapur.

As is a well known fact, the upcoming 2014 Vista project has been internally codenamed as the Falcon 4 and the refreshed  Tata B segment hatchback will make its motor-show debut at the eagerly awaited 2014 Auto Expo, which is slated to take place in early February next year. This means that there are good chances that the comprehensively updated Vista will go on sale around the advent of next fiscal.

Changes to the front fascia

Also, the car will come equipped with a set of new headlamps, which would sport projector units in the high end model and make the car’s front end look similar to the one on the Manza hybrid concept, which made its debut at the last Expo.

Changes to the rear end

While the car will sport a comprehensively updated front fascia, the biggest change will lie at the rear-end. The 2014 Tata Vista facelift might no longer sport the X-Mas tree like taillight cluster that is typical of Tata hatchbacks. Instead, the car will come with more conventional units. This is not all as the registration plate housing too would change its earlier location and will move upwards and on to the rear hatch.

Changes to the interiors

Other than a host of exterior changes, the car will also come with updated interior panels. Safely expect the car to get the Manza’s dashboard and an upholstery change. Also, the car could get a longer features list.

Changes to the engines

Engine options for the updated Vista, in all probability, would remain unchanged. However, we expect that the manufacturer would bestow them with a re-map to make them more fuel efficient.