While the new 2014 S-Class has been launched in most of the markets, the cash registers at the German car maker are surely making a lot of noise, thanks to the more than 30,ooo bookings received. Now, we had earlier brought you the spy pics of the extra long wheelbase S-Class,  which was seen wearing some disguise. Now, a WCF reader has caught the car without any disguise.

This isn’t the Pullman version of the S-class, but actually a new variant which will be positioned above the existing long wheelbase model and below the Pullman edition. 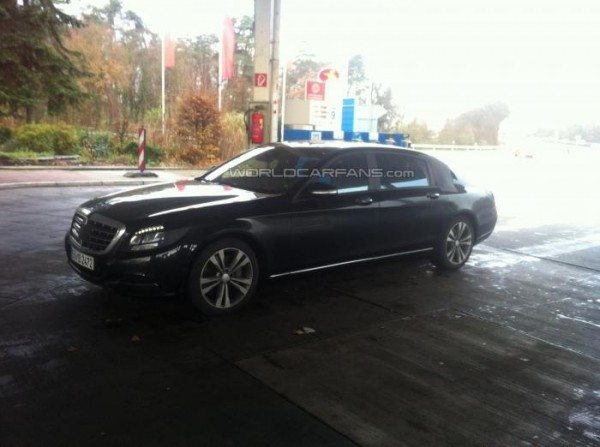 The long wheelbase model of the W222 S-Class available right now, is 5246 mm in length (which is available for Indian market as standard), this extra long wheelbase version is expected to have more 200 mm added in its length. The car will feature a 2+2 seating layout. As evident from the pics, this car features a hidden quarter glass window which isn’t included in the rear door.
As for the aforementioned Pullman edition, which replaces the legendary Maybach brand from Mercedes, will be almost six meters long and will feature a 2+2+2 seating layout. The Pullman is expected to be out by May 2014.

The W222 Mercedes S-class comes with many electronic driving and safety features which are step forward towards Autonomous Driving. The S-Class features an Optional Magic Body Control system. This system consists a stereo camera mounted within the windscreen which scans the road ahead and automatically modifies suspension damping to multiple or individual wheels within a fraction of a seconds to maximize comfort and minimize the vertical movement of the car while going on a bump.

The car is expected to be on sale next year.