Upcoming new gen Mercedes-Benz C63 AMG has been spied once again. The performance variant of the C class was caught on camera while heading to the Nurburgring for testing.

The test mule, as is evident from the pics, carries heavy camouflage. Despite the heavy efforts, the front fascia is quite visible. The grille design can be easily rendered digitally. Also, the air vents are somewhat similar to the outgoing model. On the rear side, the square shaped exhaust tips and the lip spoiler are clearly visible. 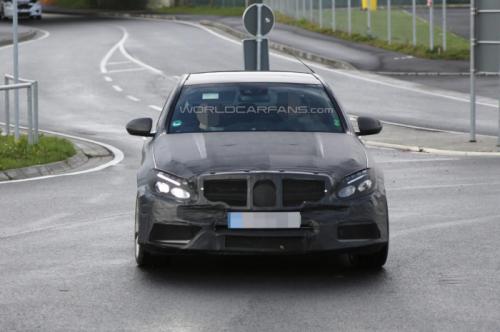 Although details on the powertrain are unknown, it is believed that the 2014 C63 AMG will be offered with a  twin turbo 4.0 litre V8 engine. This engine is expected to deliver a power output in the range of 485-500 HP. The engine will also be more fuel efficient than the outgoing engine.

Other features will include an AMG SPEEDSHIFT seven-speed dual clutch transmission and AMG DRIVE UNIT. This Unit allows the owners to modify many of the vehicle’s settings, from the speed of gear shifts to the suspension stiffness. Also, same as the outgoing model, the new C63 AMG will be offered with All Wheel drive as standard, in the USA.

The new C-Class, which has been shown inside out officially, is expected to be unveiled in the first part of 2014. The C63 AMG is expected  to be follow a couple of months later. Also, an estate version will be featuring the AMG moniker in 2015. Mercedes-Benz will hopefully build a new Black Series model of the C63 AMG.