Thanks to our follower, Mani Bharathi, we’ve got our hands on the most detailed and clearest spy images of the upcoming TVS Apache RR310S (formerly known as the Akula 310). So let’s have a look at what’s coming from TVS’s stores very soon. 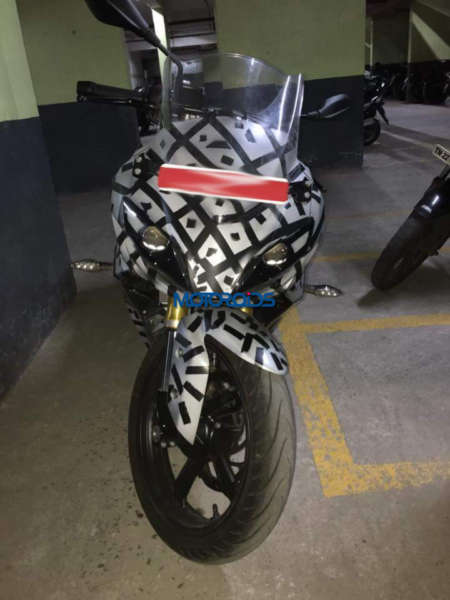 Upfront, the new TVS Apache RR310S will feature a pair of projector headlights with LED pilot lamps. A pair LED blinkers are placed on the fairing although we would’ve liked to see a better integration, something that the KTM RC390 does pretty neatly. Then there’s the tall windscreen which should offer good protection from the wind at high speeds. We’d hold that thought till we ride the motorcycle. Following the windscreen is the vertically designed instrument console with gear-shift indicator. The motorcycle was turned off and thus the finer details of the instrument cluster are not available. 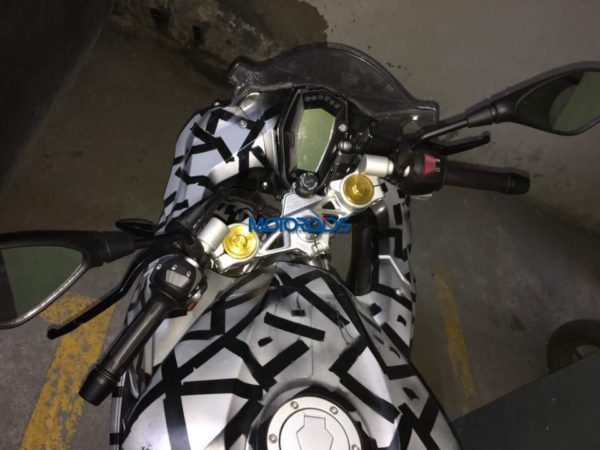 The motorcycle uses a clip-on handlebar to steer. However, from what we observed from the previous sightings, the riding stance will not be too aggressive. The switchgear quality looks at par, if not better than its rivals. As you can see, headlight switch has been removed as the motorcycle, like all BS-IV compliant two-wheelers, will feature all-time running head lamps. The chiseled fuel tank does not get the Apache RTR200 style asymmetrically mounted filler cap. The one on the Apache RR310S is a centrally placed flush-mount tank lid. 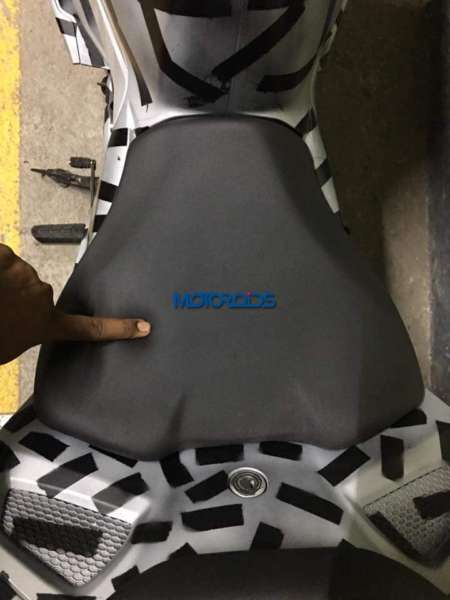 The motorcycle features a step-up split seat and going by the images, it appears to be a well cushioned saddle. We’re not sure how comfortable that pillion seat will be and we’d talk more about that once we get to ride the motorcycle. The test mule did not feature a pillion grab rail and going by the design of the rear panel, it isn’t likely to get one. The pillion rider will either have to take the support of the rider or use the seat mounted belt. 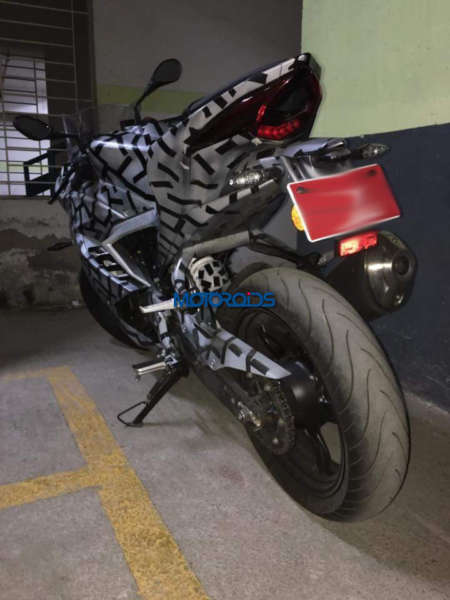 The rear is completed by an unconventional and attention grabbing LED tail light. The tail light somewhat reminds us of the reverse OHM (Ω) symbol. Agree? The rear blinkers are placed on the rear fender along with the numberplate illuminator. 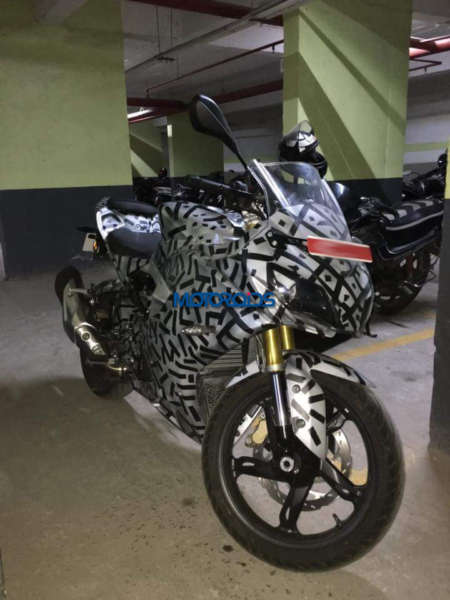 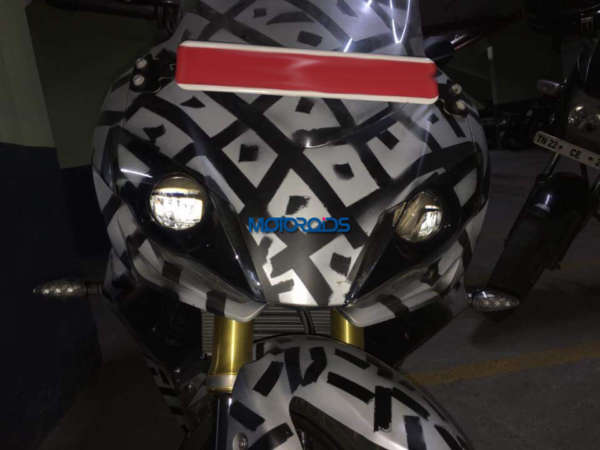 The dual projector headlight should offer good illumination at night 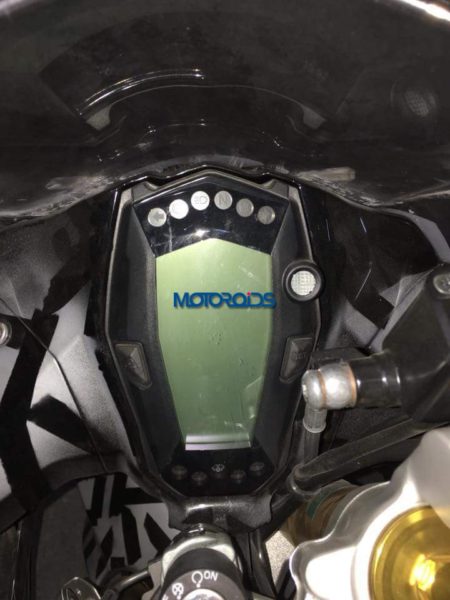 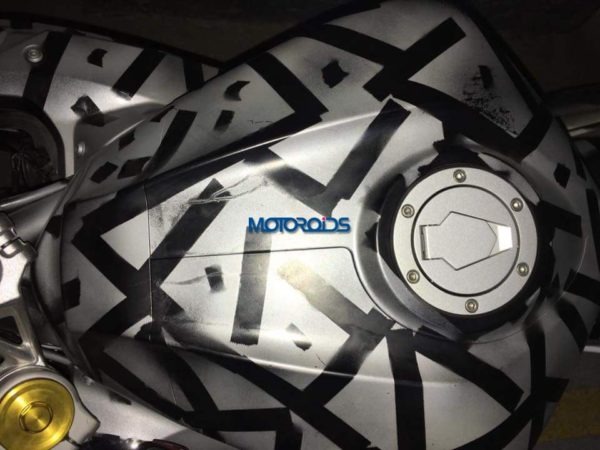 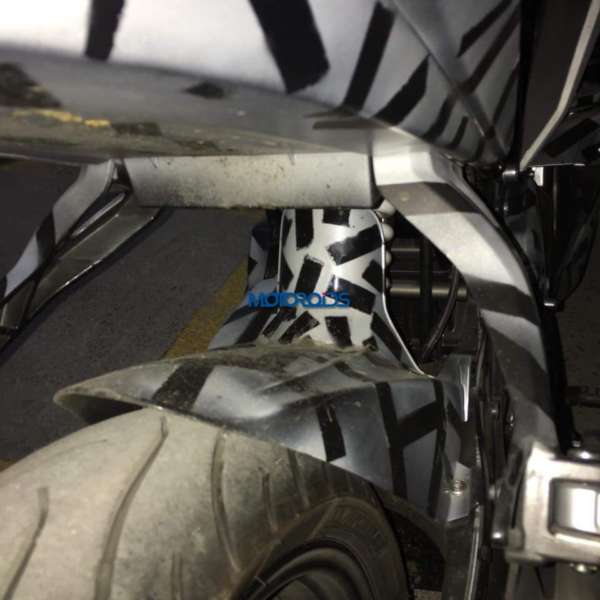 The rear monoshock protector is a good addition to the mix 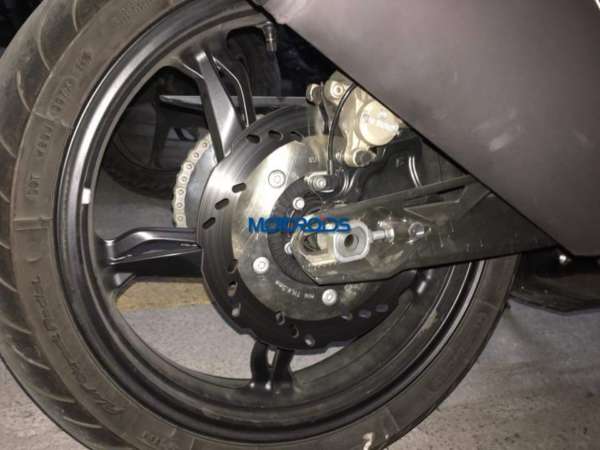 ABS may not be available as standard

One of the commendable additions to the rear is the monoshock protector. The fibre part would keep mud from being accommodated on the shock absorber. We hope that the front upside down telescopic fork also gets some sort of a dust protector, somewhat similar to the ones that are available on KTM’s range that’d protect the oil seal. 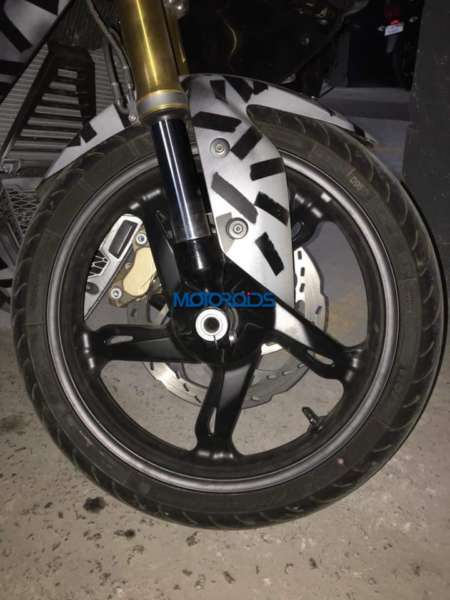 The motorcycle rides on five spoke alloy wheels which are wrapped in Michelin Pilot Street Radials although TVS may offer Pirelli tyres too for a slight premium. Stopping power will be provided by Bybre sourced petal disc brakes on both ends. The test mule was equipped with ABS although it is highly unlikely to be a standard offering.

Mechanically, as you would’ve read in our previous reports, the 310 cc single cylinder, liquid cooled engine is based on the BMW G310R’s motor, where it is rated at 34 bhp and 21 Nm. 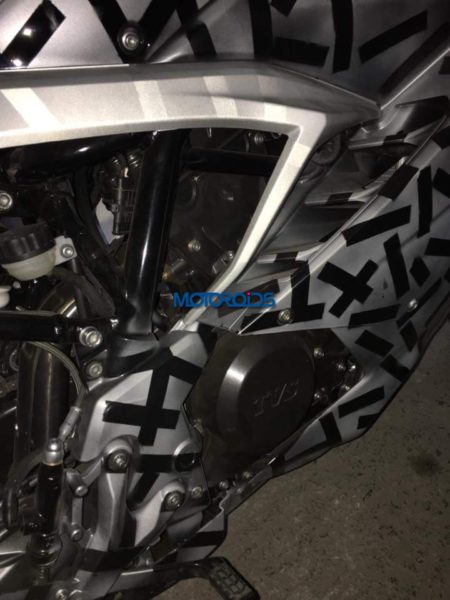 Here is the detailed image gallery of the upcoming TVS Apache RR310S. Let us know your views about the motorcycle through the comments section below.