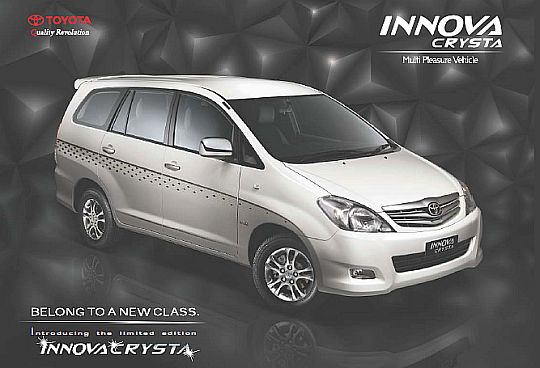 Toyota Innova is so well established in the market that there is no competitor who can stop its advances. Innova has consistently been performing amazingly in terms of sales figures for Toyota. Though Toyota will launch the facelifted Innova sometime soon, for now, the Japanese carmaker is offering the Innova in a limited edition avatar called ‘Crysta’.

The Innova Crysta is nothing too radical but the stock Innova introduced in a special white colour named as ‘Super White’ which is the major visual change you will spot. Also there are new graphics on the car, there are new smoked alloy wheels, a roof spoiler at the rear & muffler with chrome tip which comprises of external changes.

On the inside of the Innova Crysta gets dual tone leather seat covers, new panels on the dash board and new Toyota branded floor mats. Under the hood remains the same engine which is the 2.5lit diesel engine with intercooler producing 102bhp. Toyota is offering only 1000 such Innova Crysta’s and only till October.

Recently even the M&M Xylo came up with a limited edition. Maybe if Toyota could introduce some more relevant changes. The upcoming Maruti R III might be a right answer to the Innova’s monopoly in the market.