Not every one of us lends himself to the dreary, boring and often annoying city commutes. Some of us wish to leave the grief laden city roads behind, find a stretch of tar that our wet dreams are made of and put pedal to the metal in deserted havens for the petrolhead. Experiencing this sheer joy and excitement can’t be done with just any car available, though. It is meant to be experienced with something that is specifically built to fuel up your adrenaline. In India, however, the concept of a hot hatch is a watered down version of what the term means for our European or American counterparts. Even for those on a relatively limited budget, we have some hot, OK, some of them warm, hatchbacks available that one could buy to quench their thirst for adrenaline.

The Fiat Abarth Punto, launched back in 2015, was one of the the first of its kind hot hatches ever to run on Indian roads and add some real hotness to the hot hatches in India. Adorning the much sought after, legendary Scorpion badge, red racing stripe livery ascending from the hood and reaching all the way back to its tailgate, red highlights along the contours of the fog lamps and side skirts against the glossy black body paint, the Punto Abarth makes its presence prominent amongst other cars whilst making everyone’s head turn.

It’s here because it saw a huge price cut in India, and despite being the most revered (and expensive) hatches of this entire lot, is available at a significant discount over its original sticker price. Launched in 2016, the VW Polo GTI shares the same design language found in the standard variant of the Polo with a few design tweaks here and there. Available in a three door version, the VW Polo GTI sports a new honeycomb mesh grille, red accents in the full LED headlamps, bumpers with sharper and delicately designed front splitters, along with 16” alloy wheels with 17” alloy wheels available as an option. With the GTI produced in a limited quantity of just 99, bookings are still open for the remaining units.

Alright, it’s not comparable to the other two beauties above, but is still a relatively fast car for its segment. Baleno RS is a fresh offering from Maruti-Suzuki as an attempt to get in the game of hot hatches. Made public earlier this year in March, the Baleno RS is a sportier derivative of the standard Baleno, being one of the most popular hatchbacks in India. With respect to its exterior, the RS gets a reworked front and rear bumper along with blacked-out alloy wheels complementing its sporty look. The Baleno RS comes in only one variant which is loaded with all the popular features such as push button start, reverse camera and parking sensors and SmartPlay infotainment system. 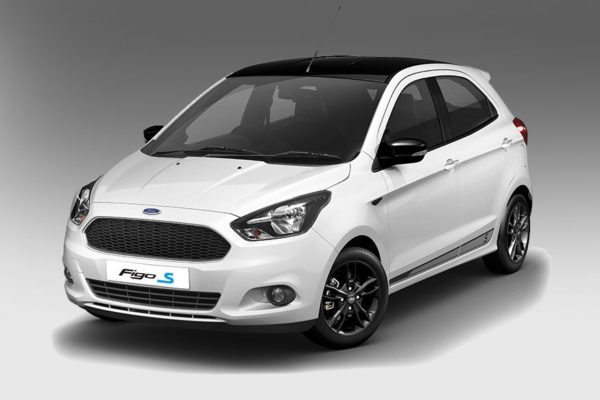 The Ford Figo S strikes the right balance between sporty looks and practical functionality. The standard Ford Figo gets a visual overhaul with the Figo S. A re-designed front honeycomb grille, smoked headlamps and blacked-out alloy wheels add a stylized look to the otherwise bland look found in the Figo. The influence of the colour black is very prominent in this sports version of the Figo with the rooftop finished in glossy black with a spoiler protruding from its end. The side view mirrors are also finished in black along with the black livery along the side and rear of the Ford Figo S.

The Volkswagen Polo GT TSI comes with the venerable 1.2 TSI petrol engine developing 104 hp at 5,000rpm and 175Nm of torque in the range of 1500-4100rpm. The engine is mated to a seven-speed DSG gearbox which, quite simply, is unmatched in its segment for its seamless shifts and blazing fast action. With a solid build quality, proven German engineering offering it dependable handling and and engine that loves to rev, the GT TSI is a rare blend of performance, practicality and convenience for the urban achiever who wants it all in one compact package. Those who prefer diesel power can also opt for the Polo GT TDI, which is quite a hoot to drive too!

*All above mentioned prices are ex-showroom, Delhi