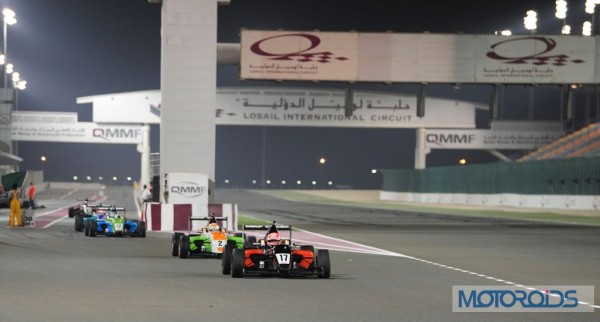 The FIA sanctioned MRF Challenge arrived at its first international venue for the season at the Losail International Circuit in Doha, Qatar. The 2014 season was flagged off with 18 year old Toby Sowery dominating all sessions to qualify on pole position in Round 1 of the MRF Challenge 2014 at the Losail International Circuit in Doha, Qatar. India’s Raj Bharath was Toby’s closest competitor after finishing right behind the British driver in both Free Practice sessions. Raj qualified in 4th position after getting traffic on his flying lap.

Free Practice 1 gave the drivers the opportunity to learn the circuit and get more comfortable with the cars. Bharath, who is competing for in the MRF Challenge for the second year, set the early pace and continued to go faster as the session went on. Sowery left it late and went faster with Bharath on his final lap to top the session. Bharath finished in 2nd position with Brazilian newcomer Pedro Cardoso finishing in a surprise 3rd position ahead of GP3 racer Ryan Cullen and MRF 1600 Champion Tarun Reddy completing the top 5. Mathias Lauda finished in 6th position with Freddie Hunt in 10th position. The other Indian drivers Lee Keshav and Vikash Anand suffered some mechanical problems which limited their running.

Free Practice 2 gave the drivers their first chance to drive under the lights at the fast flowing Losail circuit. It was once again Bharath taking control of the session by going fast early on. As the session went on Bharath and Sowery exchanged fastest laps with the former edging ahead with 7 minutes to go. As in FP1, Sowery finished the session ahead of Bharath with Kyle Mitchell finishing in 3rd place. Ryan Cullen and Niki Mazepin rounded off the top 5. 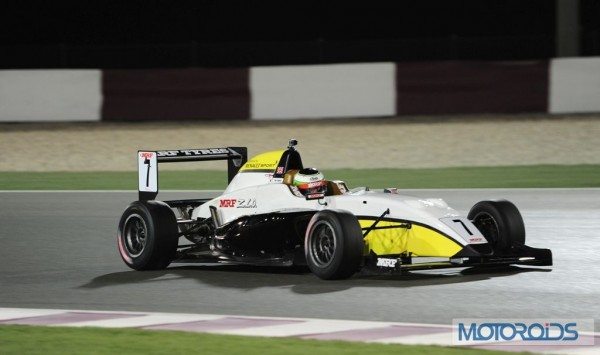 Sowery was definitely the man to beat as the drivers headed into qualifying. He continued his impressive practice pace to head the timesheets early on. Bharath and Ryan Cullen went 2nd and 3rd fastest. Laura Tillett brought out the red flag when she went off on her flying lap. When the session resumed all the cars went out together. With the session coming to a close there was a frantic rush with the times tumbling and all drivers going faster. Sowery’s time of 2:00.294 was enough to put him on pole with a tight fight for 2nd place. Russian driver Nik Mazepin saved the best for last when he put his car in 2nd place ahead of Ryan Cullen. Bharath, caught traffic on his flying lap and will start in 4th position with Kyle Mitchell in 5th. Mathias Lauda will start in 6th ahead of Tarun Reddy and Freddie Hunt. Vikash Anand and Lee Keshav recovered well to qualify in 11th & 12th positions respectively after limited track time in practice.

Thrilled to be starting from the front in the first race, Sowery said, “It was a very good day and went much better than I expected. It is a track I have never been but the car was really good and very well balanced. The car is similar to the F3 car so my driving style suited it well. Race is 15 laps long so it will be important to get a good start and have a clean race. The grid looks very competitive so should be a good race.”

Raj Bharath, Sowery’s closest competitor through the practice and qualifying sessions, was disappointed to be starting in 4th position but was confident of having a good race. He said, ” We got off to a good start in practice as we had a good base setup to work with and just put in the laps. The last time I raced was also in the MRF Challenge in February so it feels great to be back! Qualifying obviously was disappointing as I just couldn’t get a clear lap without traffic towards the end when the track was at its best. We ended up a couple of positions down from where we expected but there are four races so looking forward to the rest of the weekend.”