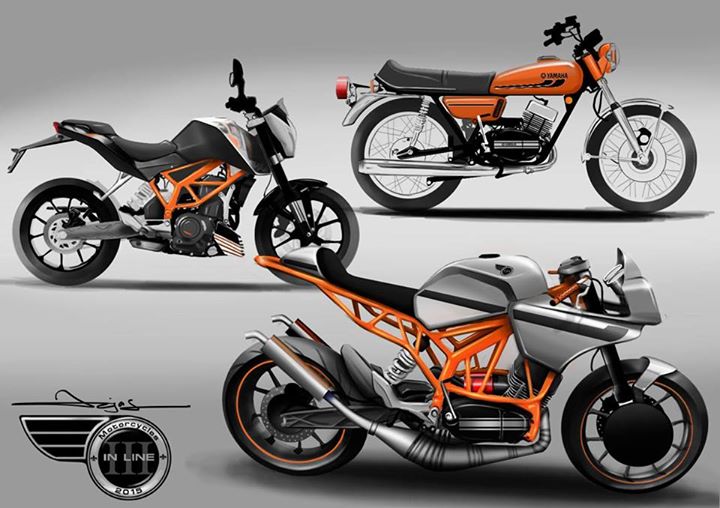 The Yamaha RD350 is truly a legend in the history of Indian motorcycling, setting the bar high, not only for the motorcycles from yesteryear but holding its own against the more recent performance motorcycle of similar cubic capacity. A benchmark, even today, for motorcycles in the 300-500cc segment, the RD350 is a true icon for the Indian biking aficionado. A similar sort of attention is caught by the KTM Duke 390 for the maddening sensation of acceleration that the 375cc single cylinder engine delivers. Now imagine what could be the potential of a motorcycle that combines these two power mongers. The final result would definitely be a product that would present adrenaline packed rides for a really, really long time before one plans to upgrade. 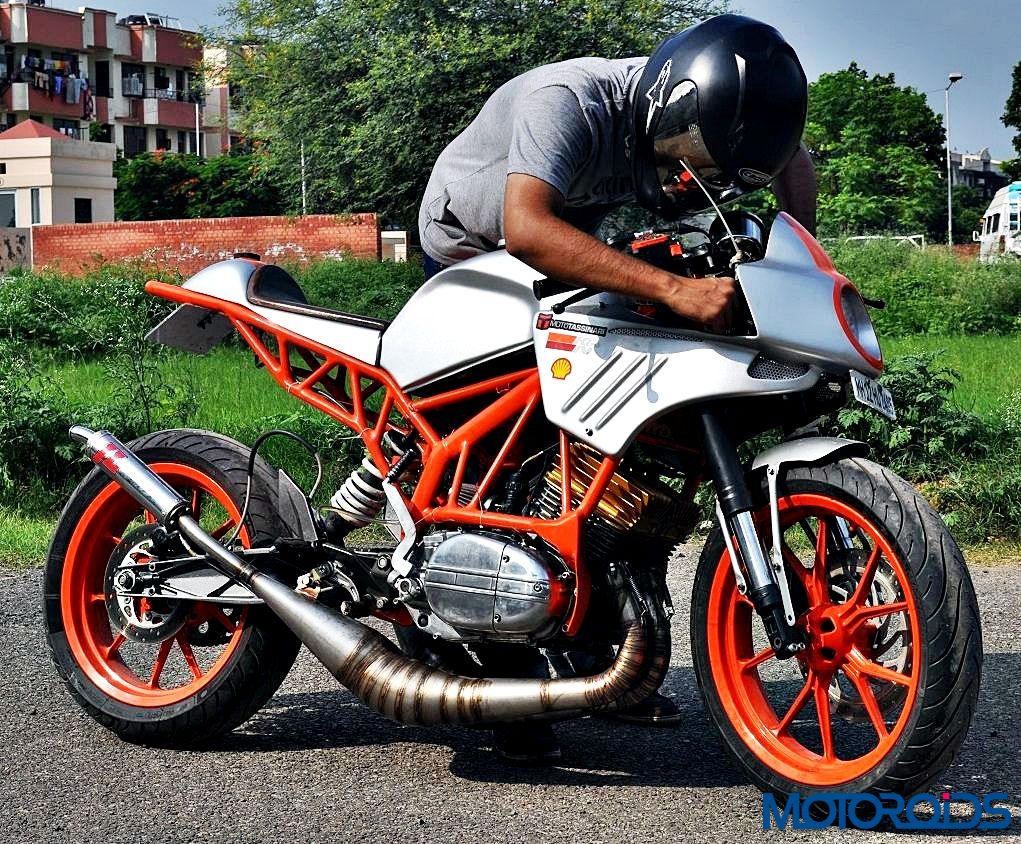 Meet Aseem Singh Pawar‘s brainchild, a heady concoction of the rebellious past and the precisive future – the RD-DUKE. Fondly called the “Flying Sikh”, it is essentially is a modified KTM Duke 390 trellis frame, cradling a US-spec Yamaha RD350 heart, aided by KTM cycle parts.  Hear Aseem’s story, and more about his cracking creation from the man himself:

Birth of an idea: It started in the 8th and final semester of my design journey in college. Two wheels have always ruled my heart, so much so that, I would indulge in endless discussions about bikes every night in the hostel with my buddies (Ryder, Tejas and Sounak). 2 years ago I was at the end of design schooling at MIT, Institute of Design, Pune.

My last academic semester ended and I had to engage in an internship for my Graduation project for six months. I secured one at Stanley Black and Decker, and during the corporate ordeal, I realized that I was not cut out for nine to five jobs. I finished my stint at the company, graduated, and during the last few days and after much soul searching I realized what was it I really wanted to make of my life. 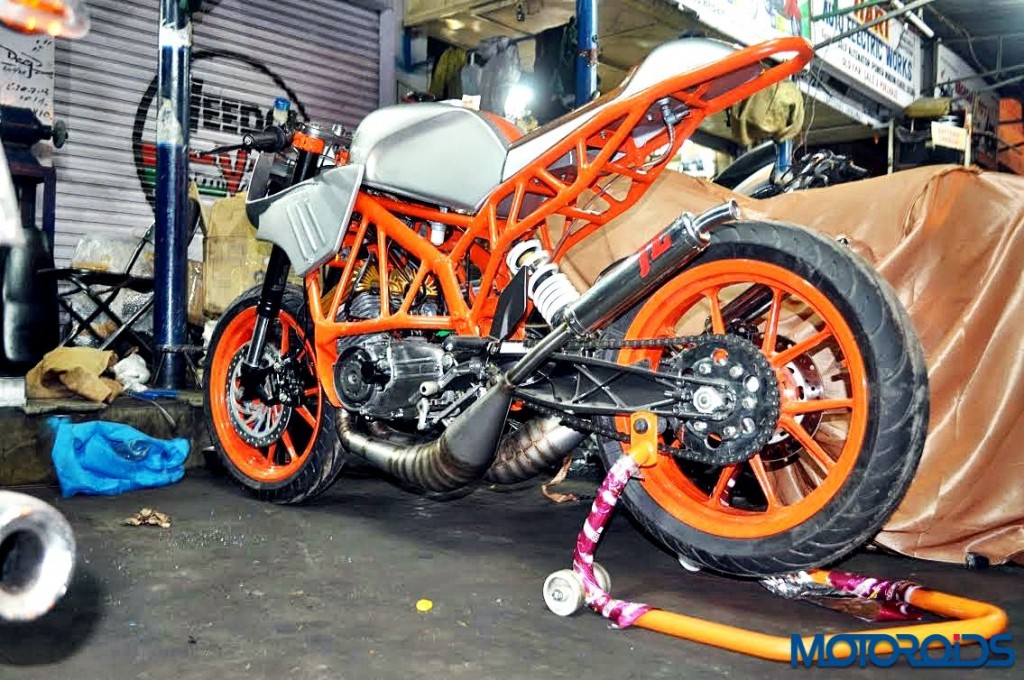 The Plan: I had two confidants at MITID who also shared the passion for bikes with me through design school who I envisioned working with further. Tejas, being one year junior to me was still finishing his final year. I called Sounak who is also my batch-mate and discussed the idea which had been brewing at length. These

conversations gave birth to Inline3. Inline3 was born as a concept where ideally Sounak, Tejas and I would work as a team. Tejas was to handle the design department, Sounak the 3d software department and I was to handle the fabrication bit. We had plans to be in the same city and build our first bike KTM Duke200.

Unplanned events: But somehow destiny had its own calling, and Sounak went ahead to take up a job at General Motors as a design sculptor and Tejas continued his internship in Pune with Honda. 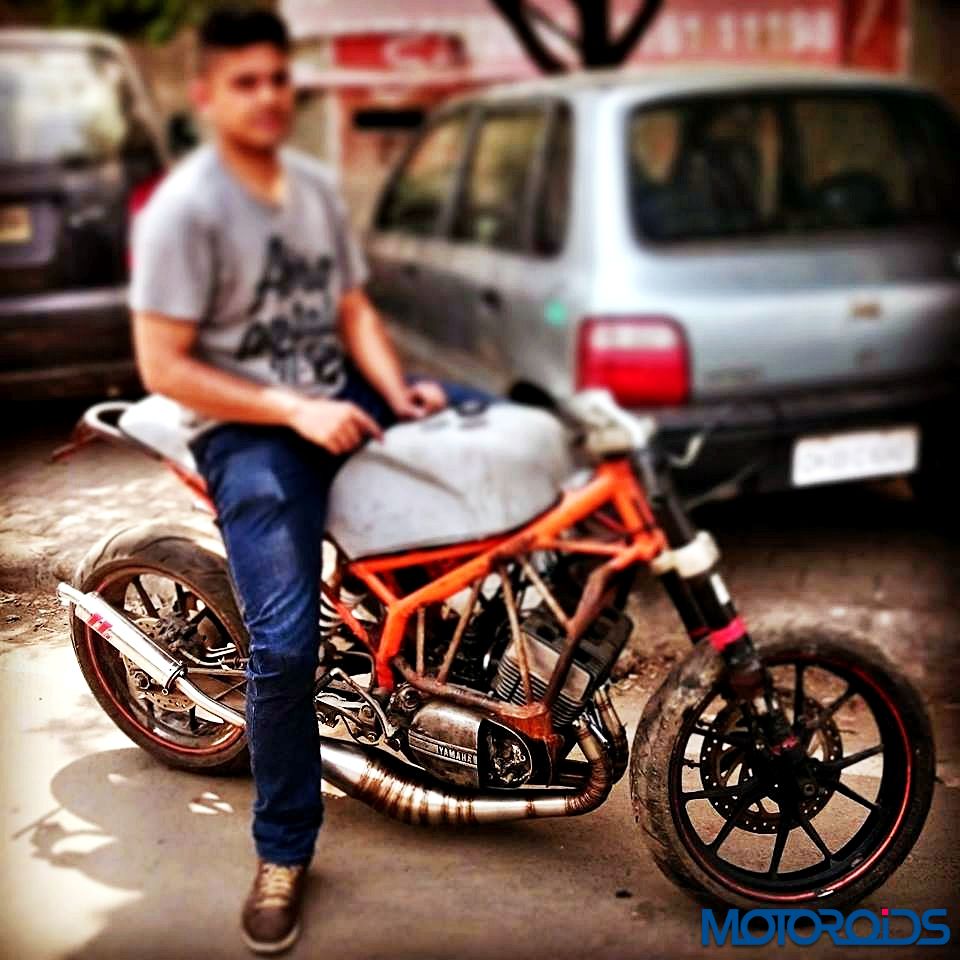 I was frustrated, furious and disappointed that I had to journey alone to achieve my dream. But I picked myself up and set my mind to first challenge at hand. I came back home to Chandigarh and confided in my parents about my dream. Believe it or not, they gave me a green signal, something most parents would be skeptical about!

So I decided to carry on and gain some vital first hand experience of custom bike building. I looked at all the possible bikes as a base platform for my first bike. But somehow nothing was striking the right chords until one day I came across a Yamaha RD350 at a local mechanics shop.

My love for two stroke bikes comes from Sounak because he had been riding a Yamaha RX135 since ages and I used to own a KTM Duke myself and this is when RD-Duke was born as a concept.

I bought a duke chassis and managed to find a RD crankcase. Everything seemed to be rosy till this point, but things were soon about to change. 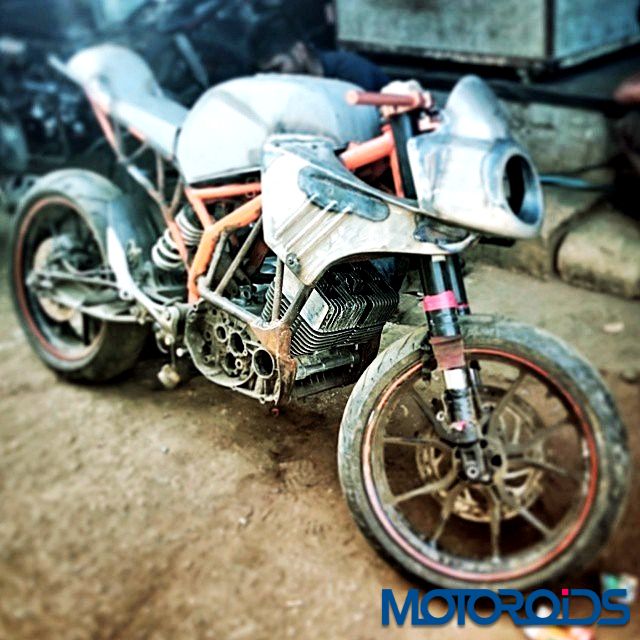 It took me 3 months just to custom fabricate the engine mounts- something unimaginable for a person who is used to gaining results in good time. I was at an all time low, under stress that I had probably undermined the hard work and patience required. Though my parents, Sanya (my girlfriend) and Sounak kept me going.

I could make a spaceship with MDF (Medium density fiber, wood substitute) but metal.. it was new to me. So I started searching for metal fabricators, which was futile effort at first because people don’t trust entrepreneurs and get queasy to step out of their comfort zones. Those who agreed harped on my problems, and almost everyday I had a new fabricator, Ultimately, I found someone willing to place trust and and willing to create my design of engine mounts.(Ram Rolling Factory) 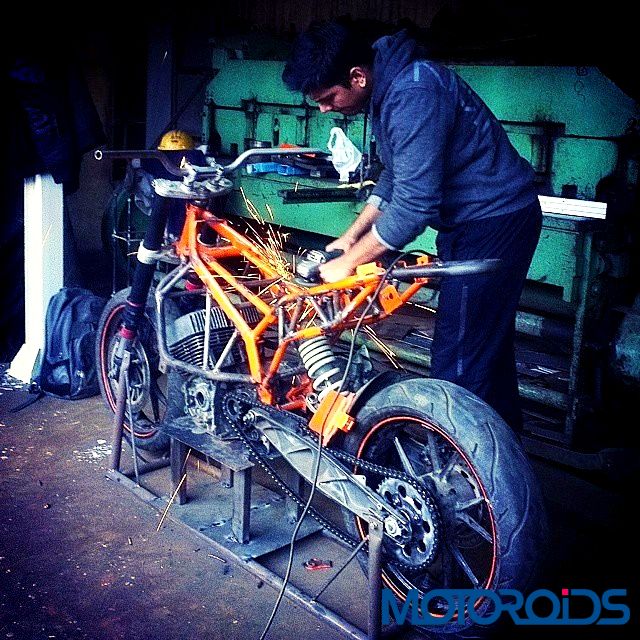 The Engine: Earlier I had decided to stick with stock Indian spec RD350 and put more emphasis on the design part. But my love for performance was equally strong. Having lusted for U.S. specification Rd time and again, I ended up ordering almost everything from the U.S.A. I gathered all parts under one roof only after six months with the invaluable help of Mr. Avtar Singh (2 stroke expert).

The list of performance parts which entered the bike and most of it imported from the US. 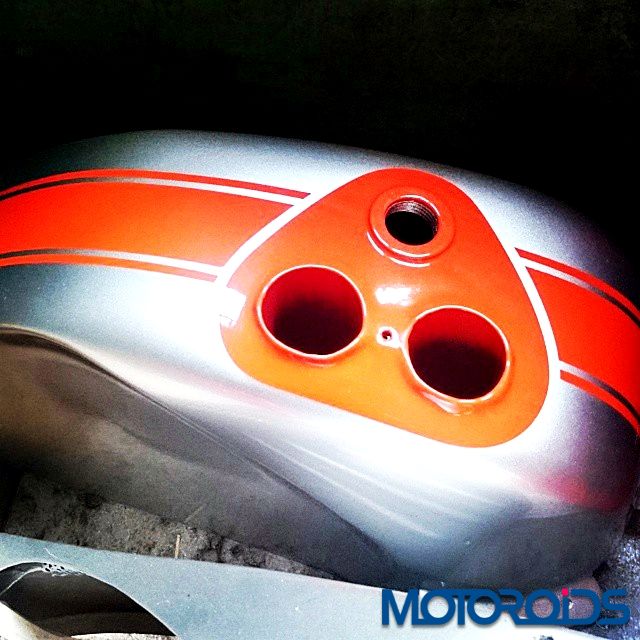 The Design: In college I never followed the right ‘steps’ for design process. I would make a model first and then make the sketch. In this project too, I did the same thing and I was heavily criticized by Tejas and Ryder. All the body panel design work was directly translated from my head to the raw sheet metal by the expert hands of Munna Bhai. Muna Bhai had never seen a trellis frame. The moment he saw it he broke out in laughter and went on to call the bike a crab After a long painful wait the day came when all the body panels along with the engine were bolted on to the chassis.

Twenty Fourth of July 2015 is a day I will never forget, I fired up the engine and took my first ride. I had constructed this day in my dreams a million times and on this day I cried like a five year old. The bike was named Flying Sikh by Sounak, a symbol of my Indian roots, the famous athlete Milkha Singh and the shared passion for speed. 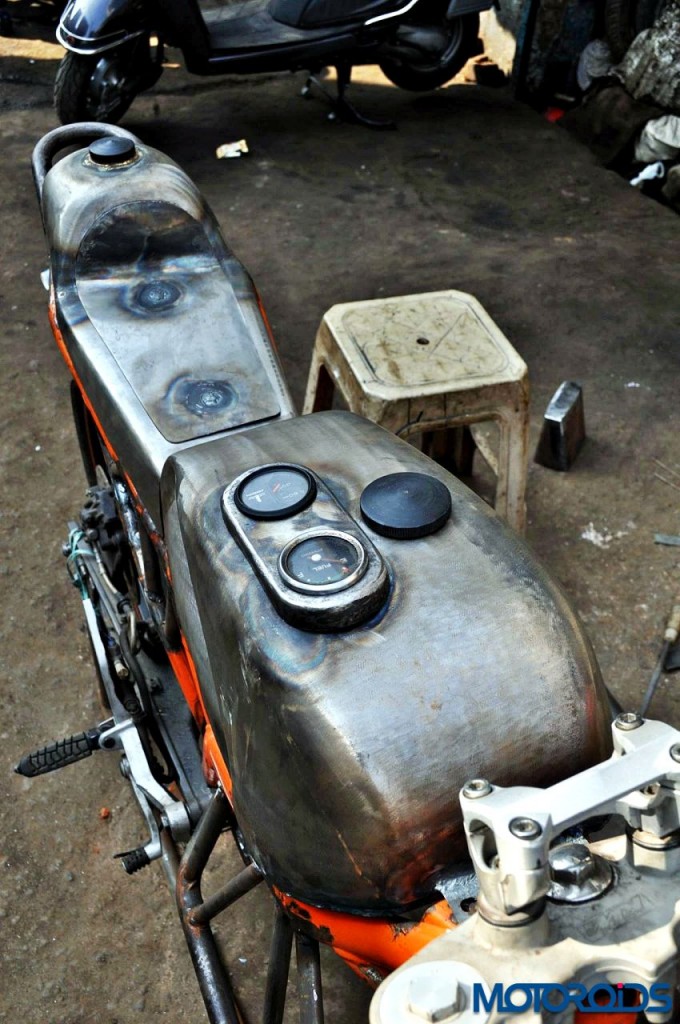 After a year of agony; blood, sweat and tears I managed to conclude this seemingly outrageous project which wouldn’t be possible without the financial support of my parents.

As of this day, I’m the only operator; dreamer, designer, modeller and fabricator of Inline3. I work out of Chandigarh, and have many more projects in the pipelines of my dreamy brain.

I believe our greatest weakness lies in giving up. The most certain way to succeed is always to try just one more time. What’s worked for me is not quitting and being passionate about what I do and not giving up – and when I don’t believe in myself, the humility of turning to others who believe in me.

I also secretly wait for the day when Tejas & Sounak are in a position of serious collaboration to complete the Inline3 dream team. 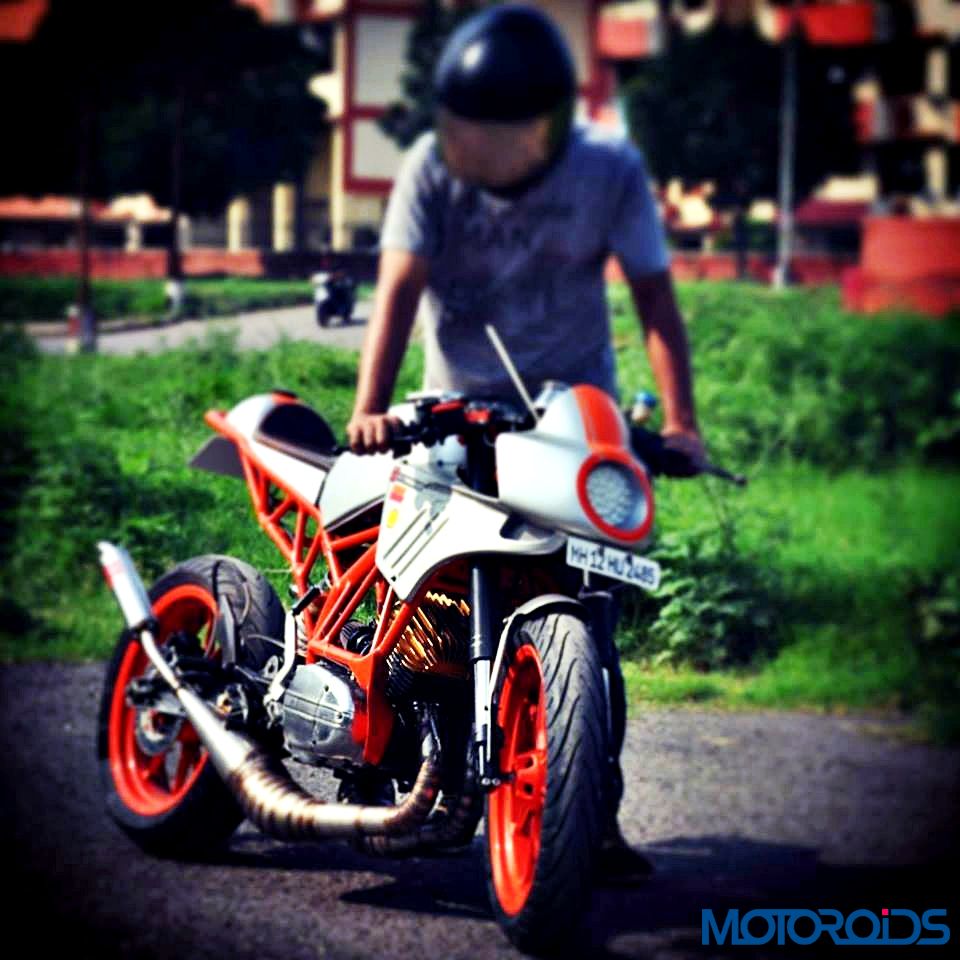 The body panels have been completely designed from scratch with a bikini fairing standing at the fore of the motorcycle followed by the fuel tank that also doubles up as the instrument cluster. The clip-on handlebars offer a sporty riding stance while the split, step-up seat set-up has been replaced by a cafe racer style unit for a retro look.

The stock trellis frame from KTM Duke 390 has been modified to hold the Yamaha RD350’s engine, which is now rated at about 40-45 bhp. The exhaust with the expansion chamber also deserves a special mention. The weight of both the exhaust pipes adds a mere five kilograms to the motorcycle. The stock Metzeler tyres from the Duke have also been replaced by a pair of Michelins. 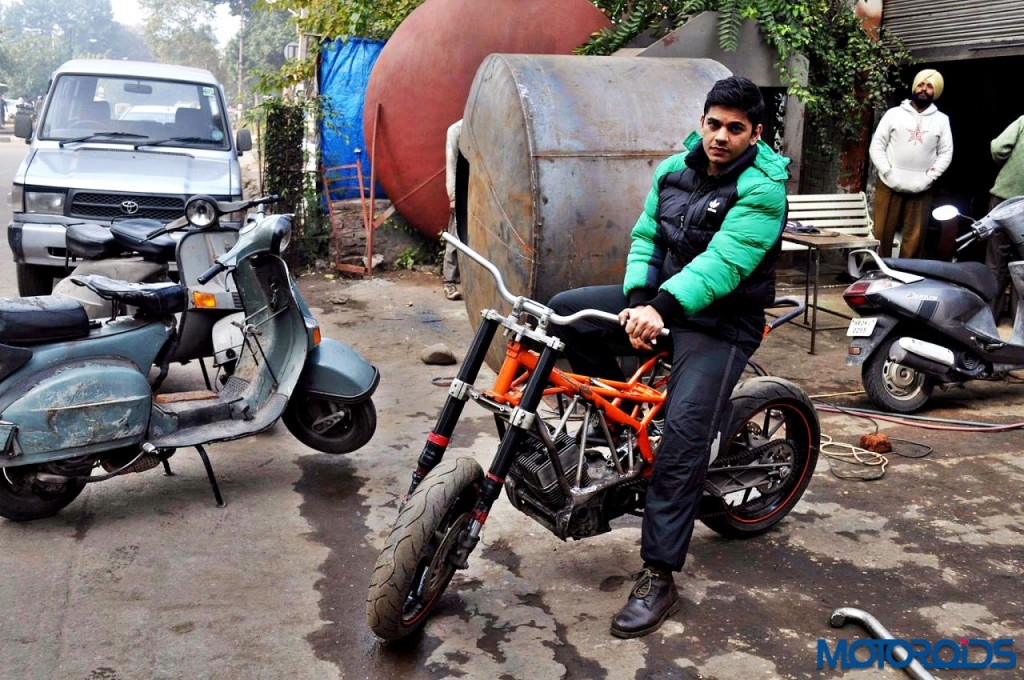 You think you’ve got a custom ride that world should know about? Share it with us at feedback@motoroids.com. If it impresses us, we will feature it here.