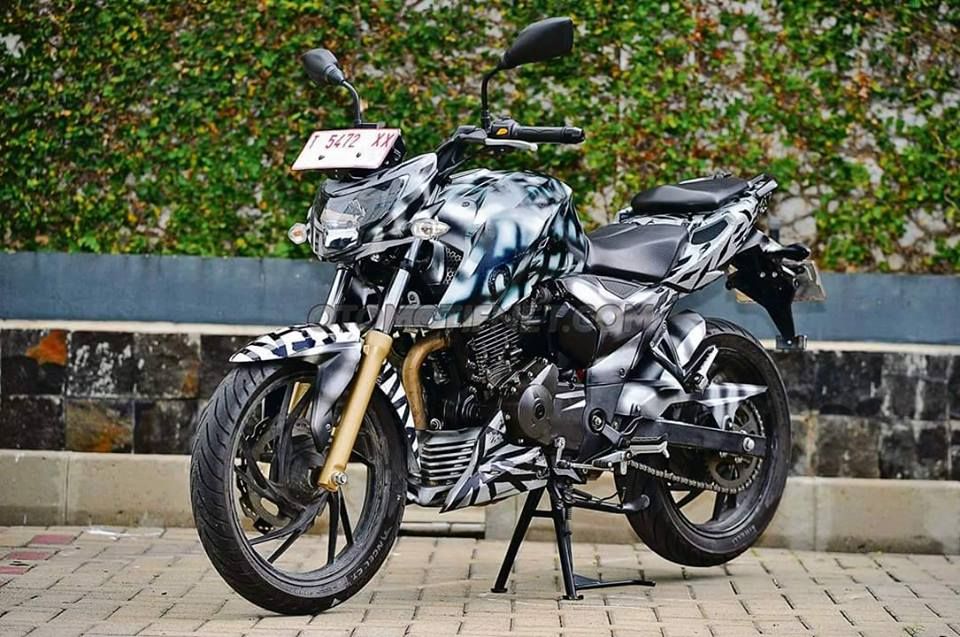 The official unveil of the upcoming TVS ApacheRTR 200 4v is just a week away and there we have a clear and up-close photograph of the bike. We already know about the buzz this TVS offering has created and we have also reported dozens of news pieces and spyshots with you guys. So without further ado lets discuss about what we have here.

On the visual front the bike stands with a sharp and edgy profile. The head unit has lost the chunk like on the previous ApacheRTRs. The minimalist fairing houses a headlamp and id fitted with side indicators. The number plate seems to be oddly placed on the crown of the head unit. The variant seen in the image sports a clip-on handlebar. The front suspension kit stays standard skipping the fancy upside down setup. The bike rides on a pair of premium Angel-GT sport touring tyres from Pirelli. These rubber shoes are claimed to be the highest mileage sport touring tyres. They are fitted on to a 5 turbine style split-spoke alloys. The combination compliments the street fighter look of the ApacheRTR 200. Un-interestingly, it is reported that the Indian version of the RTR 200 will be shod with a pair of TVS rubber.

The bike sports a fairly large fuel tank; the tank extensions give it more muscle. The side panels are almost negligible and expose the engine. The engine is a 200cc single-cylinder four-valve air/oil cooled engine nestled into a double cradle frame and is a load-bearing member. The ‘4v’ suffix to the name defines the four valve tech. An instated under cowl protects the engine from kicked up debris. 25bhp of power and 22Nm of torque will be created by the powerplant. The power will be pushed to the wheels by a 5-speed transmission. Cooling system on the bike is reported to be sourced from BMW. Further a stylish two piece seat, sharp grab rails, a wide tyre, open drive chain comprise of the rear section.

Some might say that TVS is late at offering a 200cc bike, but many still are excited about it. Maybe the bike maker just took time to open its cards. In the Indian market the bike will go head on with the Pulsars, KTMs and others of the 200cc segment. The bike is expected to carry a price tag around INR 90k – INR 1.2lakh.

The bike will be launched on the 20th of this month, and we will get our hands on it soon. So stay tuned for the launch event coverage and the very-much-awaited first ride impressions from Team Motoroids!