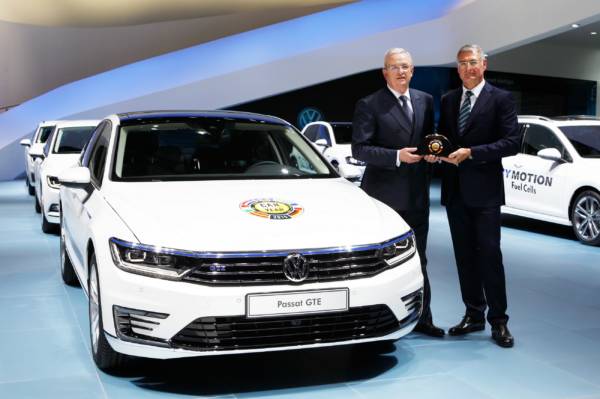 Europe’s “Car of the Year 2015” award, which is presented every year by the international “Car of the Year” jury, goes to the new, eighth generation Volkswagen Passat. The winner was announced earlier this week at the Geneva International Motor Show.

One of the oldest and most well-known awards in Europe, “Car of the Year” has been honoring the best new releases in the car industry every year since 1964. The jury, consisting of 58 European motoring journalists from 22 countries, had nominated seven candidates ahead of the final. In the preceding months, these candidates had undergone detailed testing, comparisons and evaluations based on criteria such as economy, comfort, safety, driving characteristics, functionality, design and technical progress. In the 52nd edition of the traditional competition, the new Passat clearly triumphed over its six rivals in the final with a total score of 340 points.

“We are extremely proud of this accolade,” said Prof. Martin Winterkorn, CEO of Volkswagen Aktiengesellschaft, at the prize-giving ceremony in Geneva. “In the new Passat we have again succeeded in developing a car that sets the standards for its class in terms of technology and quality. This honor is a tremendous confirmation for the work of our engineers, designers and the entire team. The new Passat shows that the Volkswagen brand has the right answers to the challenges of our time.”

Mr. Heinz-Jakob Neusser, Member of the Board of Management Volkswagen Brand for the Development Division, received the award for the new Passat: “We are delighted by the honor of “Car of the Year 2015″. This accolade has a very special significance for us because it is awarded by independent international trade journalists. In addition, the honor is known to have a high standing for our customers.”

Mr. Michael Mayer, Director, Volkswagen Passenger Cars, Volkswagen Group Sales India Pvt. Ltd. said, “We are delighted to see that the Passat has been crowned Europe’s ‘Car of the Year 2015.’ In terms of safety, build quality, advanced technology and outstanding driving dynamics, the Passat is clearly a segment leader, and rightfully deserves to win this award.”