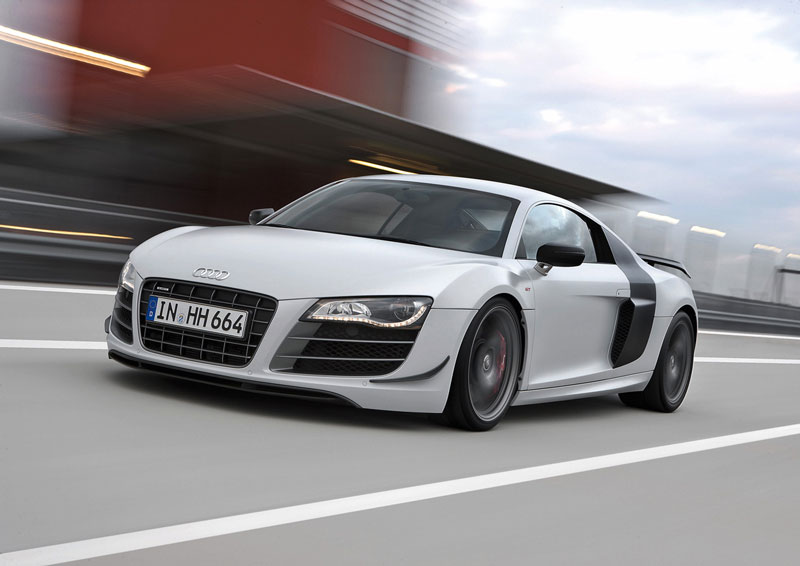 When I was a kid, my teachers used to emphasize on the difference between Mixture and Compound, in each and every Science class. According to the various primary-school science books I had read, the individual components in a ‘mixture’ retain their characteristic properties while in a ‘compound’, the individual properties are lost. Keeping this in mind, whenever there was a merger of two big companies, I used to think that they will form a compound and the BIGGER fish will influence the smaller brands so much that the small brands will lose their properties. Though my doubt will take another hundreds of years to get cleared, here is an example of how our Auto industry mixes ‘mixture’ and ‘compound’ and hence a new theory is developed which in turn means more confusion for me. But that isn’t important here. What is important here is the way how VW has kept Audi alive while adding some Lambo character to it. 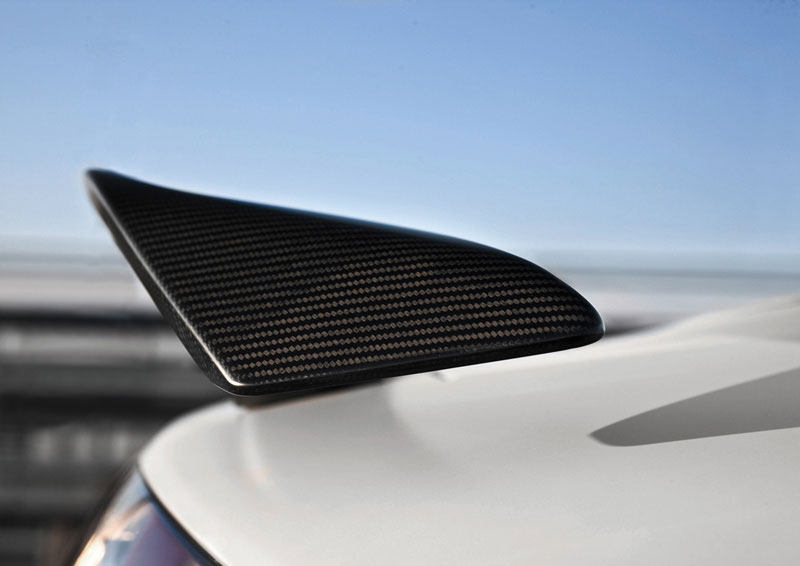 Audi has launched a new version of their sports car R8. The new car, Audi R8 GT is a lighter and more powerful sibling of their successful R8 V10. Be it the market or the enthusiasts, everyone loves the car. German Engineering! 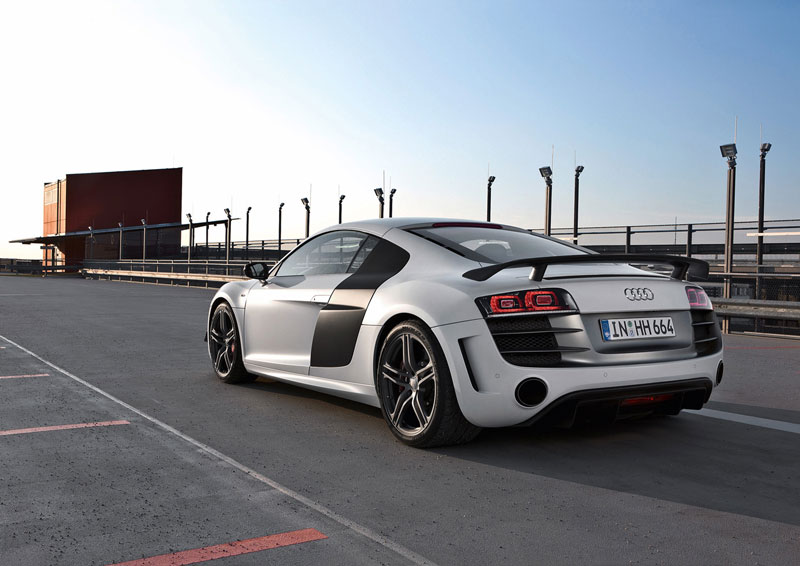 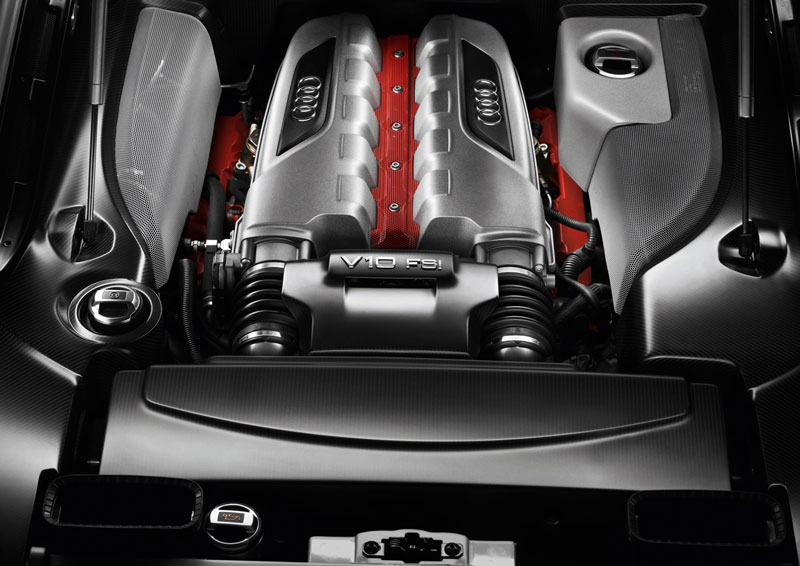 The new car is nothing but an R8 V10 sent to a Gym and only protien supplements were its diet. As a result of which, the car now weighs a whole 100kgs less(!!!) and the 5.2 FSI V10 now produces 35 more horses, taking the max power to 560 bhp while the max torque is 540Nm. Audi claims a 0-100kmph time of 3.6s(a 0.3s less than the regular R8 V10) and just another 7.2s is all it takes to reach the 200kmph barrier while it flatouts at 320kmph,an increment of 4kmph over the R8 V10’s 316kmph.Talking about the transmission, the car gets the same hydraullicaly actuated R-Tronic sequential gearbox as found in the R8 V10. 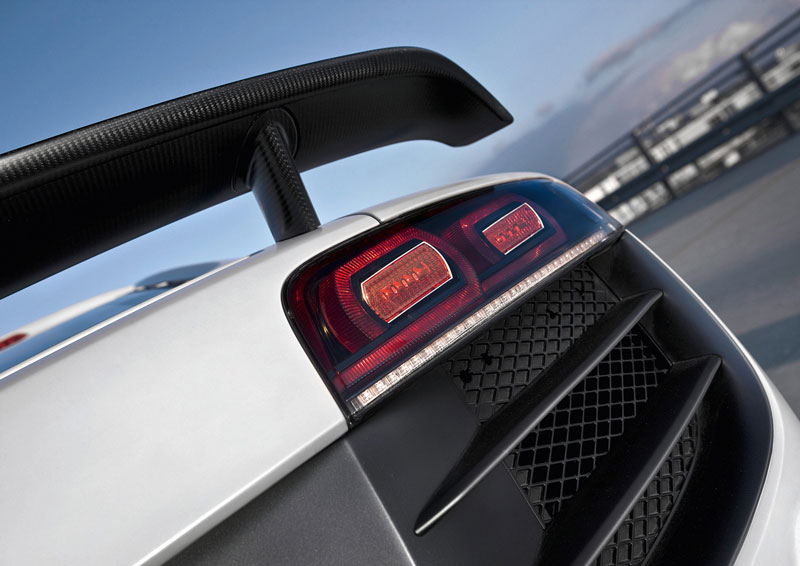 Weight reduction has played an important role in helping this car achieve these figures. Audi has done a deep research on weight reduction which is evident from their press release of this car and the car itself. They have made an already light car(1625 kg) lighter by a 100kgs. R8 V10 was already light courtesy ASF,which stands for Audi SpaceFrame body,made out of aluminium but with the GT, Audi has gone a step further. They replaced a number of alumminium body panels with…(you guessed it right) CARBON FIBRE, for example the rear hatch and the front splitter. They used lighter glass for the rear windscreen and polycarbonate material for the windows. They have worked on the aerodynamics too.It produces more downforce while maintaining its drag coefficient of 0.36. Rest of it is similar to R8 V10. The design is still attractive and the quality is the same one would expect from a German brand. Like the other Audis, it gets the magnificent quattro system which makes it stable around the bends and gives the car a very predictable handling characteristics.

But only 333 R8s will be made in the lightweight GT form. The car is priced at €193,000 in Germany. A number of options are available to make the car more exclusive and there is a race package available too for all those who want to make it a proper track tool.

So what next? An Audi R8 SuperVeloce?

Only time( and Audi management) will tell.