Home News The Doctor signs the deal with Ducati!? 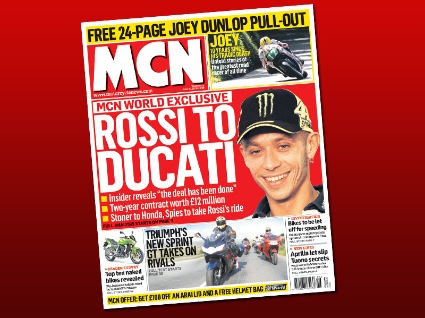 The truth behind all the speculation and rumors surrounding Valentino Rossi’s next move in his MotoGP career will finally be put to rest in a couple of days at the Catalunya GP. Behind the scenes at the MotoGP of Assen, a member of the Fiat Yamaha Team said that Valentino Rossi will have made up his mind about sticking to Yamaha or jumping onto the Ducati wagon by this weekend and will officially announce his decision at the Catalunya GP.
However, according to MCN.com, Rossi has confirmed his plans of shifting to Ducati and has signed a deal amounting 12 million pounds with the Italian company. The deal came into being after negotiations pertaining to renewal of Rossi’s contract with the FIAT Yamaha Team went sour. Also, Rossi’s reluctance to race along with Jorge Lorenzo has a lot do behind his decision. A senior MotoGP figure, has been quoted saying, “I know for sure that Rossi will go to Ducati next season. The deal has been done. One month ago it seemed impossible to imagine this, but Rossi will be in red next year.” If this deal is officially confirmed over the weekend, we will surely miss the Rossi- Lorenzo dog fight on the Yamaha’s. But we are also quite tweaked about watching just how the Ducati gets tuned to suit the God of motorcycle racing in the 2011 season!
News
,
Comments
Leave a Reply Cancel reply