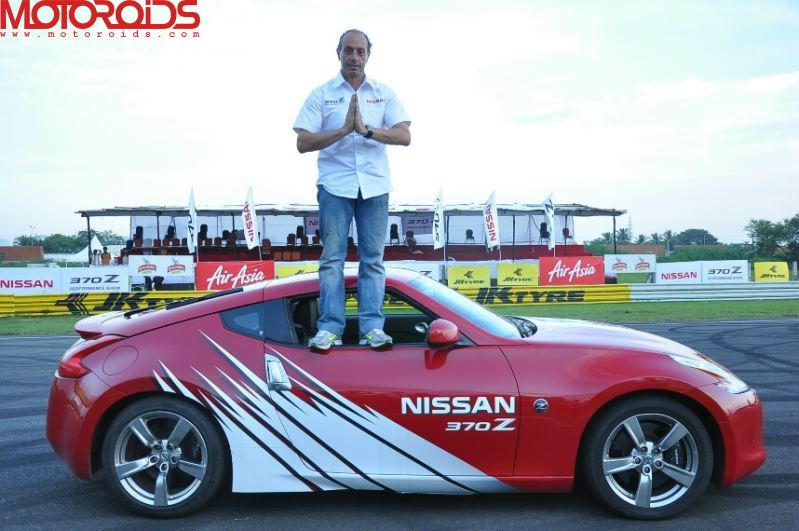 Terry Grant, the international drifting icon, in association with Nissan India used the 370Z at the MMRT race track Chennai to bring Performance Drive Program to India. The stunt driver used the Nissan 370Z for his show as part of the 14th JK Tyre National Racing Championship. The activity was meant to bring the affluent segments to the 370Z which is also known as world’s most affordable sports car.

Two drifting sessions conducted by Terry included maneuvering the iconic car through the track just on two wheels. Terry also took zig-zag loops across and along the track.  This is Guinness Record holder Terry Grant’s second visit to India for a performance show and the first show in India using the iconic 370Z. It is first in a 3-programme series, which Nissan is bringing to India in order to establish performance driving and to nurture local drifting talents.

After performing the act, the drifting legend Terry also gave hands-on experience to a few potential customers in the cult product Nissan 370Z, known for its maneuverability for drifting and performance driving.
Emerging from the 370Z after the performance, Mr Terry Grant said, “Racing tracks are the best place for a person to experience the capabilities of any Sports car and test its performance which cannot be tested completely in normal roads. Nissan 370Z is a smart choice for customers considering its high performance as compared to other competitors, and yet affordable.”

According to Mr Dinesh Jain, Chief Executive Office, Hover Automotive India, “today’s performance show utilizing the talents of Terry Grant is  to reiterate the fact among our valued customers and prospective buyers that with its safety packed features, enhanced quality all around, and precision-crafted performance package, 370Z is unarguably the best choice of sports car. Not only that the energetic, thrill-seeking user can enjoy one of the finest sports cars in the 370Z, he can also indulge in opulence by selecting the best car for the best price.”

The 370Z is the sixth-generation of the Nissan Z-car line, succeeding the 350Z. It is powered by a standard 333 PS and 363 Nm Torque, VQ37VHR 3.7 L double overhead camshaft (DOHC) V6 engine with variable valve event and lift control (VVEL).