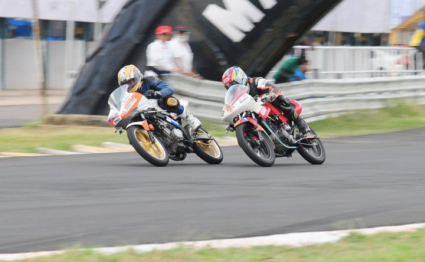 All you guys who follow Indian motorsports might have noticed a new team’s name being repeated every now and then. Team Ten10 Racing is the team we are talking about here.

Ten10 Racing was formed in the year 2009.Since then they haven’t looked back. Its an honour for us to be partners with a team which has been consistently winning almost every race possible. Their latest achievement is a new lap record they managed to set at MMRT, Chennai during the Sidvin Indian National Motorcycle Racing Championship 2010 (INMRC) about which you would have read earlier as we had a small article on that too. If you haven’t then please find it here.

And it is the same Championship where they managed to score some points even amidst the treacherous weather conditions. Round 1 of the INMRC was held on the 5th of June. Weather as forecast was bad with rain and thunderstorms spoiling the fun but was unstable too as it kept on changing its mind on whether to let the riders race on wet tyres or dry slick ones.
Like other championships it was a two-race format for every class. Time constraints meant that no one from Motoroids could go and witness the races. But coutesy Ten10 Racing we have a small report of round 1 of the Championship.

Group-D (130cc)
Race one saw Padmanabhan from Ten10 racing giving his equally talented competetors a tough fight right from the start. Eventually he grabbed the second spot on the podium which got him championship points as well as a good season opener.
The second race wasnt as smooth though. He crashed but determined to finish the race got back on his bike and completed the race in fourth place.

Group-D(stock 165cc)
M. Sudharkar of Ten10 started from pole and continued to lead till lap 2 of the 6 lap race but unfortunately crashed while entering C5. He was injured and wasnt able to continue. He now is fine and made a comeback in Race 2 in which he secured himself a second place.

Group-B(modified category)
This is the category which brought the widest grins on Ten10 team members and Sarath Kumar’s fans. Race 1 was bad. Sharath managed to get a pole position as he lapped the circuit in just 2:01.767
Poor visibilty and bad lighting courtesy the bad weather conditions made the officials postpone the race. The race was held on 6th morning. But then it rained. And only two laps were finished when the race was cancelled as the track was way too slippery which could have proved to be a potential danger for riders. Sharath Kumar finished in sixth place(according to the 2-lap race results)

Race 2 made the young Sharath Kumar use all of his skills to continue riding amidst the tight competetion namely Karthik of TVS Racing, Sri of Moto-Rev India, TK Vishwanath of Pacer India. But as laps passed Sharath kept on growing stronger until he won the race after setting the fastest lap-time of 2:01.01.

Race 1 was full of confusion and Ten10 even had to file a protest. Ten10’s Vikram used dry tyres in this wet declared and even with that he was able to get to third spot but a crash brought the red flag. The results Sameer get a 6th place.
Race 2 saw Ten10 Racing’s Vikram finish the race second. But as a ten second penalty was imposed on him, thanks to his foul start, he was shifted down to fourth spot.

Team principal Ramji Govindarajan said, “It was an exhaustive weekend. Challenges were extremely difficult with the unexpected change in weather and that made it very difficult for riders and the teams. But still, we (Ten10 Racing) managed to pull off a few podium wins and most importantly, points to keep the Championship alive. Now we know our challengers, and they, in turn, know us. Upcoming races are only going to be even tougher but we are prepared to face the competition.”

Next round is in July. We will make sure that we attend the event as we cant afford to miss all this high speed action anymore. By the way, after reading this, you should be clear of which team to watch out for. Aren’t you?