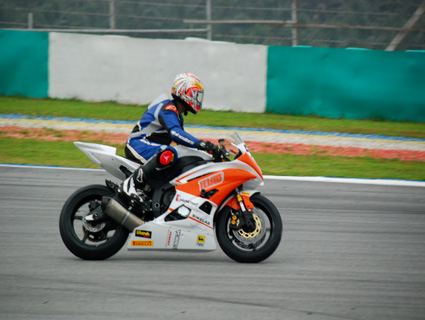 A very much heated up challenge amongst the top most Asian racing teams and riders is what exactly the Malaysian Super Series is. It is a battle where these teams and riders try to climb a steep slope towards ultimate success in the world of Motorsports, using the mean of this premium motorsports event in Asia. Amongst the various teams competing to get into the pinnacle position was the Ten10 racing team which was given a prestigious position in the Super Sport Open Class by number 59, Emmanuel Jebaraj. The first race weekend was held on May 29th and 30th at Sepang International Circuit, Malaysia.
Race 1:
Emmanuel Jebaraj hit the race track with the bike which was built by Bike Lab Singapore for the qualifying session on the 29th of May. He raced against 30 other racers and managed to finish 10th in the qualifying session with a time of 2:24.783. Amongst the 30 other racers, many belonged to top Asian teams such as AP Honda Thailand, Petronas Sprinta, Yamaha, AFX Racing Malaysia, Team Looi’s Motors and more.
Emmanuel’s splendid performance was repeated after the qualifiers as he started from row 3. In the battle amongst the middle pack, he managed to achieve a time of 2:25.2 in the first lap. But things didn’t remain same in the second lap when Jebaraj faced a brake failure and ran wide at a corner which cost him his position which made him finish at the 17th position in the race and 12th in his class.
Race 2:
The brake bug was fixed before the second race in which Jebaraj managed a splendid start. He found himself within the first 10 in the first two laps competing against some of the fastest motorcycles of his class. With a time of 2:26.0 he finished 18th in the race and 13th in his class.
The opening round seemed to be a very good learning experience for Ten10 racing. Jebaraj finished 12th and 13th in the first two races in his class respectively which was a satisfactory performance for the team. Present at the event was the Team Principal, Ramji who was satisfied too with the team’s performance. It was a matter of pride for Ramji that the team had managed to finish its first international race weekend successfully. The team is now ready to perform with a better magnitude for the second race weekend that will be held in July.
Ten10 Racing claimed that their success wouldn’t be possible without its sponsors including PlaNETsurf Creations Pvt Ltd, Diadem Technology Limited, AGIP Lubricant India, KBC Helmets and Performance Racing Store and their fans and well wishers.
News
,
Comments
Leave a Reply Cancel reply