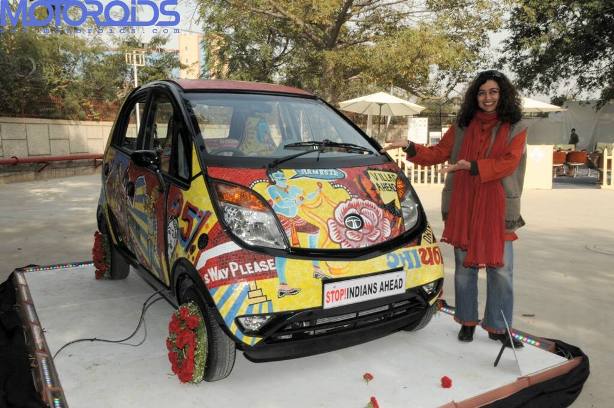 The imagery created by Ms. Ketna Patel has been transferred on the Tata Nano in Mosaic style by SICIS, the world leader in Mosaics. Marrying art and utility, the Tata Nano has been embellished with the pop coloured mosaics of SICIS’s Murano Collection in a dose of psychedelia, to recall the atmosphere and energy of Indian streets. Using a method similar to that employed by artisans of the Byzantine period, SICIS, has executed the mosaic artwork on the Tata Nano at their factory in Italy. This artwork took 4 months to develop and this unique collaboration has resulted in converting the iconic Tata Nano car into a symbolic ‘Jewel for the masses’.

Indigo Blue Art has titled this exhibition ‘Stop, Indians ahead’ and this exhibition will enrich the dialogue between one of today’s Indian Diaspora artist amidst a flourishing contemporary art scene in India. It articulates the interests and concerns of a Diaspora artist living in contemporary society. Ms. Ketna Patel has drawn on subject matter from India and Asia whilst referencing the political conditions of their current environment. Using materials which reflect the growing resurgence of consumerism and globalisation, she successfully chronicles a changing Asia whilst simultaneously examining issues such as South Asian identity, globalisation and consumerism.

Ms. Patel fears that the cultural life in existing Asian streets is evaporating. Traditionally, the notion of the ‘streets’ as found in Asia represents the vital organ of human needs.  However, these sites are slowly disappearing to make way for urban development. The heritage and uniqueness of the Asian streets are being dissolved dramatically due to mass consumerism and globalisation becoming more prevalent. In her attempt to map the changing nature of the heritage and culture of the streets, Ms. Patel records every available aspect of it in her imagery. She has meticulously captured images of various street hawkers, road signs and even people on the Tata Nano. The Tata Nano has been chosen to portray this art since it is a metaphor for a rapidly changing India.

The Indian Art summit is an annual art fair – the largest in India and now in its third year. There will be over 200 artist’s whose works will be on display. Along the art fair there will be a sculpture park, video lounge, curated art projects, life performances, elaborate speaker forums, an art store and a range of exciting collateral events.