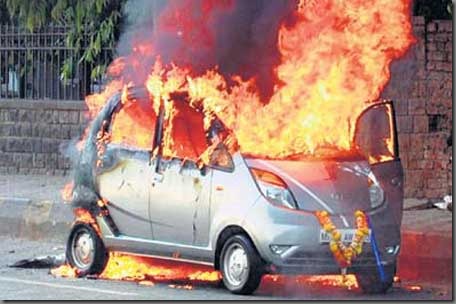 The world’s so called cheapest car,- the Tata Nano, is back in the ring to grab some spotlight out of Ferrari’s face in the game of blowing up cars and reducing them to ashes. FYI, the current standing is Tata Nano = 3; Ferrari 458 Italia = 5

Barely three months after Tata’s intellectuals certified the Nano to be ‘Blow up free’, another Nano went up in flames at a parking lot in Aurobindo Marg in New Delhi on Friday. According to India Times, the car caught fire in a parking lot in Aurobindo Marg on Friday, while the owner of a vehicle, Supreme Court advocate Patrick John, was still inside the car. The man says that as he was waiting inside the car, sparks began flying from the rear engine compartment. The car turned to ash in about two minutes.

“I was waiting in the car, having just parked it, when sparks started coming out. Thankfully, I managed to leap out of the car in time. I shudder to think what might have happened otherwise, since it was all over so fast. The entire car was destroyed in two minutes flat,” the advocate told India Times.

Tata announced on Friday that they are launching an investigation into the incident, but those with knowledge of the matter already begin placing the blame for the fires on the owners. According to some experts, the fires may be caused by improper wiring of aftermarket systems like power windows or audio systems.