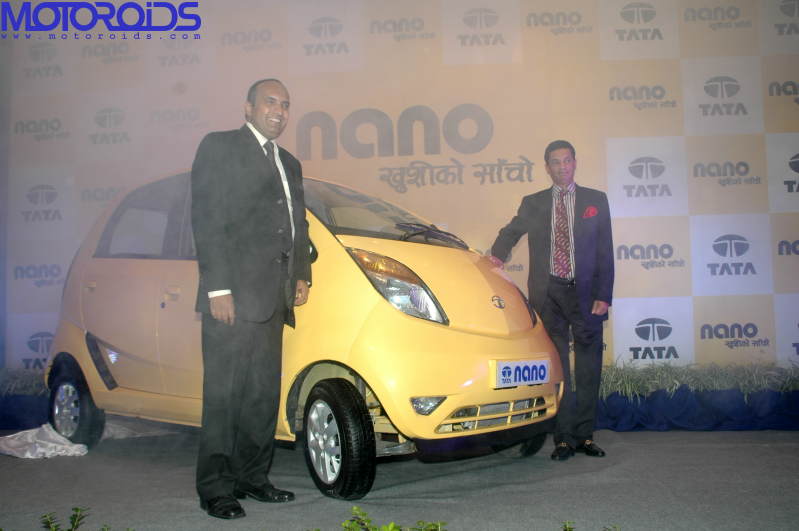 Tata Motors have launched the Tata Nano in Nepal. The company will sell the car across Nepal through the company’s distributor, Sipradi Trading Pvt. Ltd., at 14 Sipradi owned & Sipradi authorised dealer showrooms. The Nano has been launched in Nepal at an introductory price of Rs 7.98 lakhs, which equivalent to roughly INR 5 lakh.

In the first phase, bookings will be open for 10 days, starting from today. All the 3 variants will be available for booking at 14 Sipradi owned & Sipradi authorised dealer showrooms. The Nano Standard can be booked for NPR 10,000, the Nano CX for NPR 20,000 and the Nano LX for NPR 30,000. The EMI for the Tata Nano will be as low as NPR 11,111.

To mark the Tata Nano’s introduction, Tata Motors and Sipradi have begun a country-wide rally, called the “Nano Yatra Nepal”, which started on June 1 in Kathmandu. During the journey, two Tata Nanos will cover about 40,000 km, visiting 15 landmark destinations. The drive has so far covered over 6,000 km.

Speaking on the introduction of the Tata Nano in Nepal, Mr. Johnny Oommen, Head – International Business (Passenger Vehicles), Tata Motors, said, “We are delighted to introduce the Tata Nano in Nepal. We are confident that with its comfort, performance and manoeuvrability, the Tata Nano is the ideal small car for discerning customers of Nepal and will win their hearts. With Sipradi, we have created a country-wide infrastructure to service our customers.”

Mr. Siddhartha Rana, Executive Chairman, Sipradi Trading Pvt. Ltd. said, “We in Sipradi are proud to bring the Tata Nano to Nepal. Customers in Nepal too will now have the joy and the benefit of a stylish, feature-rich small car. With the launch of the Tata Nano in Nepal, we with Tata Motors are committed to expanding passenger vehicles to new heights.”