Tesla is probably the most accomplished car manufacturer in the world when it comes to futuristic innovations. Over the years, Tesla has become synonymous with mainly electric vehicles and their tech-laden features. One of the most prominent and futuristic features found in their cars is the Autopilot system. Even though the system lends the car autonomous driving capabilities to some extent, it doesn’t mean that the driver can become reckless and become completely unaware of his surroundings. A Tesla Model 3’s driver found this the hard way in Taiwan when his Tesla while allegedly still being in the autopilot mode, rammed right into an overturned truck.

The incident took place on a highway in Taiwan when a Tesla Model 3 drove straight into an overturned truck lying on the side of the highway. The driver reportedly had the autopilot engaged but still, the Tesla drove right into the truck. That brings us to the question that even if you have the Autopilot system on, is it rational to be carefree while being on the road? The answer is an absolute no and the video is a testimony to the fact.

Also read: Tesla On The Verge Of Creating A ‘Million-Mile’ Battery Which May Last For Decades

Tesla’s Autopilot system works on a deep neural network and uses a host of ultrasonic sensors, cameras and radar to sense the surroundings of the car. This system provides the driver with an awareness of their surroundings that the driver would not otherwise have. All the accumulated data is then sent to an onboard computer that processes the data and provides inputs in a matter of milliseconds to help make your driving safer and less stressful.

However, it does not transform your car into a completely ‘autonomous’ vehicle but is rather considered as a hands-on driver assistance system that is intended to be used only with a fully attentive driver. It is not the first instance where we have witnessed Tesla’s Autopilot failing and the whole scenario has resulted in a crash. But what makes this particular incident bizarre is the fact that this accident could have been easily avoided if the driver wasn’t clearly distracted. He could have either steered away or slammed the brakes hard in order to avoid what we just saw. 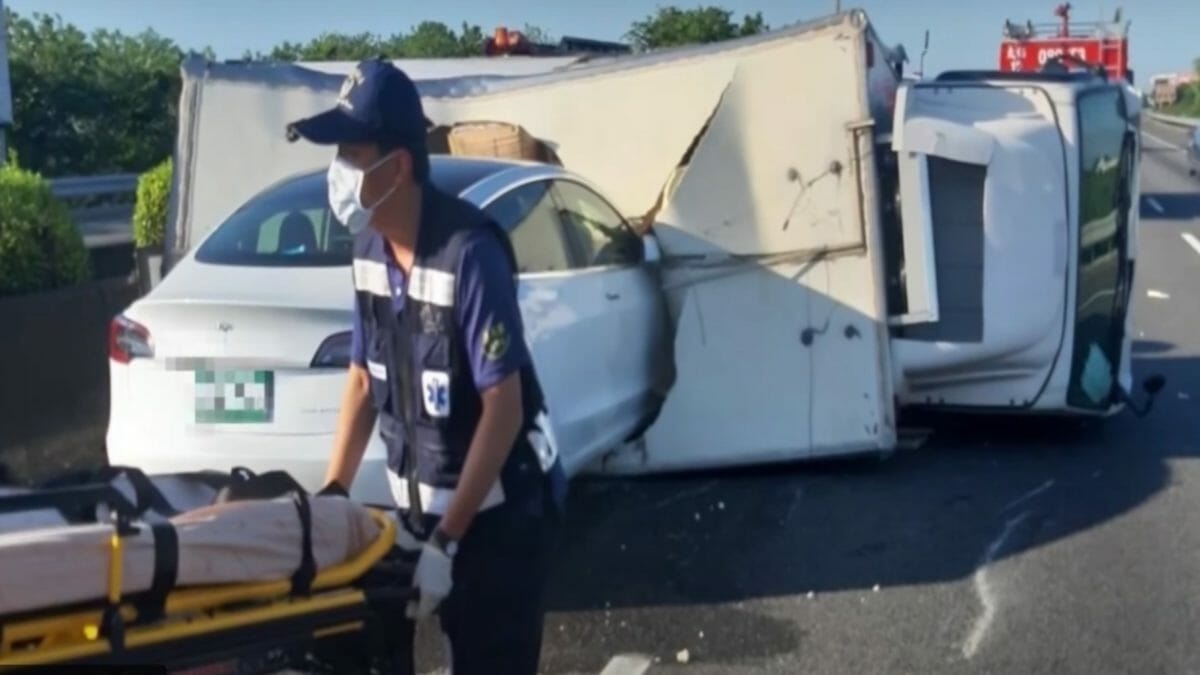 Unlike other scenarios, the driver had ample amount of time to respond to the approaching hazard. And when the hazard is a stationary overturned truck and not a jaywalker hopping on the streets, you ought to notice it, right? This particular driver didn’t and paid the price. Before enabling the Autopilot system, the driver must agree to keep their hands on the steering wheel at all times. One can override the Autopilot by steering, applying the brakes or using the cruise control stalk to deactivate. The rather ‘attentive’ driver featured here, clearly didn’t do any of the things mentioned above.

It is a widely regarded fact that nothing can replace the driver’s instincts, even if you bring in a comprehensive set of electronics coupled with a horde of sensors, radars and cameras. A driver can make a decision based on his reflex and instinct which a self-driven machine won’t be able to in certain situations. This video should be considered a prime example of why you should always pay attention on the road even if your car boasts of an Autopilot system.