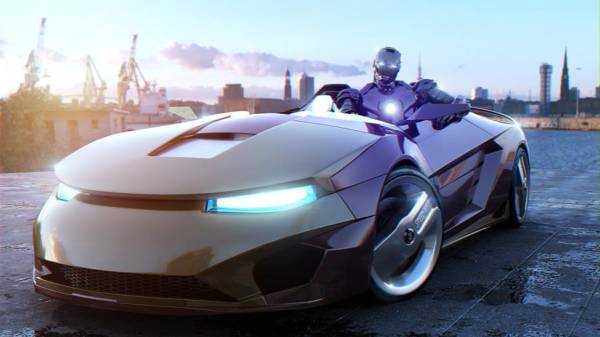 Who doesn’t like Iron Man? The fictitious superhero in the Marvel Comics Universe, also known as Tony Stark was originally designed by artists Don Heck and Jack Kirby, first appearing in Tales of Suspense #39. Initially, Iron Man was a vehicle to explore Cold War themes, particularly the role of American technology and business in the fight against communism. Throughout most of the character’s publication history, Iron Man has been a member of the superhero team the Avengers and has been featured in several incarnations of his own various comic book series as well as movies.

Of all the Avengers, he’s the epitome of cool- be it punching baddies high in the sky in his high-tech suit or presenting fancy armaments from his Tony Stark Industries.

So what does a billionaire-playboy-superhero drive? Of all his rides, and he has a handful of the best- the Audi R8 is the most popular. But we stumbled upon something more fitting to his character. This is the T6, an imaginary roadster for Iron Man created by SW Earl– a keen fan, we’re guessing.

Specific information is missing, but the T6 makes a strong case for itself. With an Iron Man mask inspired front fascia and bodywork, this virtual roadster is all kinds of awesome! The rear is overly aggressive- apt for Mr. Stark and the interiors are smart yet minimal. Those mono spoke wheels are also pretty unique.

For more of this outrageous T6 roadster, head to the gallery below.