The Suzuki Ignis is a runner-up in the Urban Car category of the 2017 World Car of The Year. The compact crossover was voted highly by the judges at a ceremony at the New York International Motor Show on April 12th.

To qualify for the initial judging process, vehicles had to be less than four metres long, suitable in design for everyday use in an urban environment and also on sale across two Continents by the deadline of Spring 2017. At just 3.70 metres in length, the Ignis easily qualifed, it was shortlisted in January and became a finalist with two other new cars in March.

World Car of The Year Juror, Director and Vice-Chair Mike Rutherford comments: “Suzuki has seen off many rival manufacturers from all corners of the globe to become a 2017 World Car finalist. 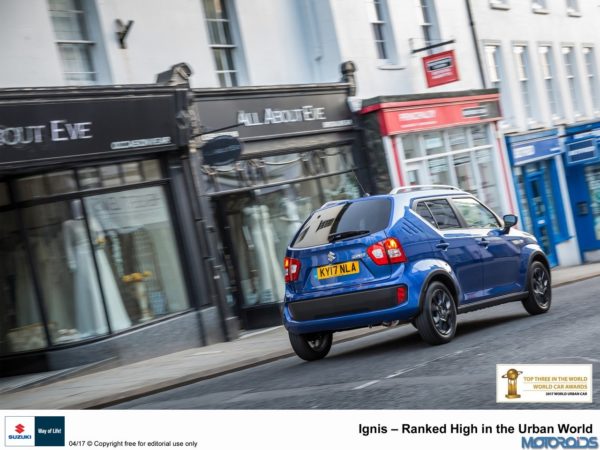 As our 70-plus jurors have decided, Suzuki builds some of the finest small cars on the market – thus the IGNIS and Baleno being voted into our Top Five in the world, with IGNIS going on to be a Top three finalist, only narrowly missing out on being crowned World Urban Car winner. This astonishing success is all the more remarkable in view of its extremely low price tag. Here’s a great little crossover vehicle proving the point that a world class car can be very affordable”

The Ignis was first launched in the Japanese domestic market, unveiled for Europe at the Paris Motor Show last Autumn and went on sale in January 2017. Available from £10,249, The Ignis is powered by a 90PS 1.2-litre Dualjet petrol engine and can be specified with ALLGRIP four wheel drive. It also offers optional SHVS (Smart Hybrid Vehicle by Suzuki) technology on the SZ5 model that lowers CO2 emissions to 97g/km.