In the past couple of years, motorsports in India have been on quite the rise. As an automotive journalist, I’ve had the opportunity to witness and participate in a number of track events and races. Endurance races are surprisingly new to India as it was introduced in the first half of this year. I was very happy when I heard about Suzuki becoming the first to host an endurance race for journalists and was even more excited to join when invited. I had an early morning flight to Coimbatore post which I was a good meal and shower away from our practice session. Unlike the last few times, I’ve been to Kari, this time around the track was dry and rather enticing. Kari Motor Speedway is a beautiful track located here in the lovely city of Coimbatore. Surrounded by peacocks, frequent gusts, coconut trees and a beautiful view to Ooty, Kari sounds like the perfect place for an endurance race! 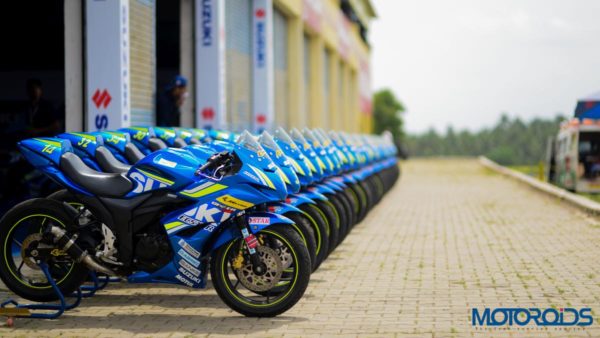 We spent most of the day witnessing a number of races creating further anticipation, as I waited to get my hands on Suzuki’s Gixxer SF in its track spec avatar. After finally hopping onto the saddle I instantly noticed the lowered clip-on setup, which honestly took some getting used to. It was pretty evident that under the skin, this machine was originally designed for a different purpose. Maybe its DNA to cover miles rather than tear them would be quite helpful during this endurance race. The lowered clip-on did manage to lower my riding position at the front, but the not-so-flat seat did take me some extra saddle time to accommodate myself. The rear cowl felt restrictive while in the tuck and the tires too needed warming up. I sat there pondering upon, what exact changes had been made to transform this machine into something that was considered track-ready. 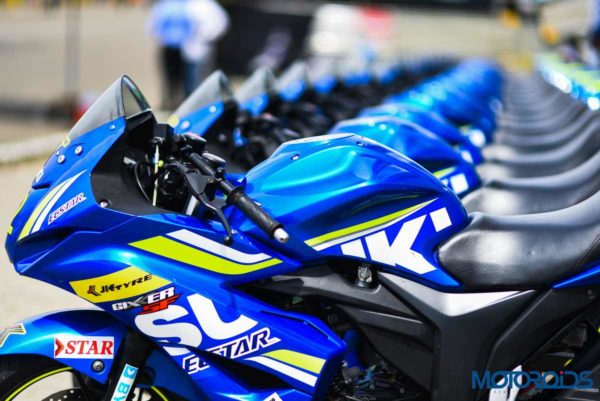 A couple of laps after I tried to find my rhythm during the practice but it was a little difficult mostly due to my taller dimensions. Unlike a normal race where riders are allowed up to 15-20 minutes on the track, an endurance race has riders spending about 75 minutes in the saddle. I can assure you that 20 minutes of hard riding is rather exerting on your body since you’re never truly sitting idle, and constantly have both the engine & wrist on the boil. Since Kari Motor Speedway is a 2.1 Km long track, and a single lap takes around a minute and a half, it’s obvious this is going to be quite a tour. If you manage to do the math, that’s around a 100 laps, lucky for us an endurance race has teams of two. Each rider has to be paired with another based on timing, so the fastest gets paired with the slowest and so on. One might see a clear loophole as did Suzuki, so a new set of rules was introduced the same night. 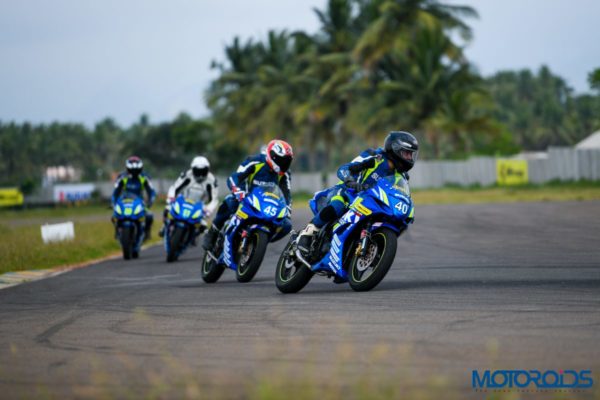 The rules were as follows, riders have to be paired up based on a lucky draw system, race time was now reduced to 60 minutes to help make it easier and at least one switch had to be made within every 25 minutes. Fortunately for me, I got paired up with a rather experienced rider named Raghav from PowerDrift who is quite the canyon carver. Riders had until the next day to devise a strategy of how and when they’d perform their switches and went over their individual agenda. Next day was our qualification was held prior to our final race, which was to determine our starting grid positions. An average of both the riders timings would be taken and the positions would be allotted accordingly. We managed to secure 2nd position on the grid, with a combined time of 1:33:000 which filled us with great hope for the big race. After devising a strategy we concluded it’d be best if we kept the switches to a minimum. 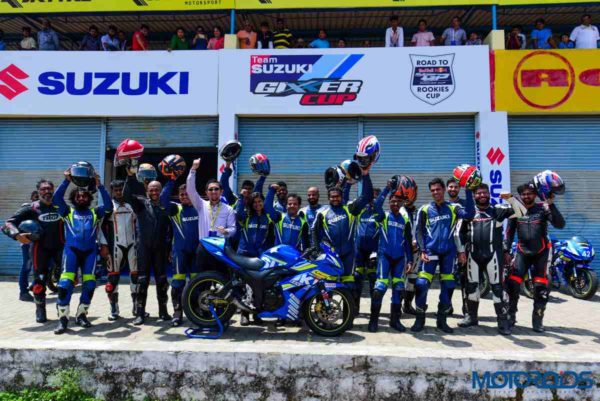 Our worst fears were losing precious time during a switch or accidentally have a crash, so we had to be very mindful of when to play it safe or put the hammer down! We also had to keep in mind the pit lane speeds, as sometimes little things like these could slip a rider’s mind in the heat of the moment, resulting in a penalty and costing more time. After a brief discussion, we settled to switch once every 20 minutes since stamina wouldn’t be a problem and three switches would be enough time for either of us to recuperate. With the planning all done with, we were ready to take it from our mental drawing board out onto the track, where the sizzling tarmac invited us to test ourselves and our metal. The race would begin with a Le Mans start, which has riders run across the track while their fellow rider waits as they held their motorcycles straight for their partners to mount. 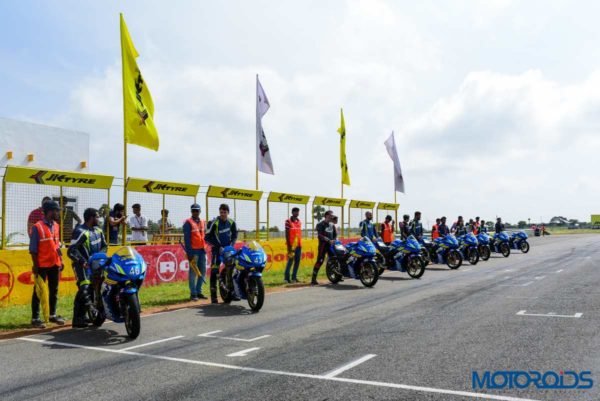 This was rather new and exciting and I can assure you, a good start can make someone in the last position take pole, which is exactly what happened as our bike struggled to start on first press. A few short seconds later it fired up but we’d manage to lose a few positions in the commotion. Raghav was gone with the wind as I stood there, waiting calmly in the pit lane hoping he is able to climb as many positions as possible, and he did in a rather spectacular fashion. I waited cheering on from the side while keeping a close eye on the clock. I must say, an endurance race is rather fun and involving where it’s not only about going faster but maintaining consistency and efficiency. So far this was quite thrilling just watching as with each passing minute I’m one step closer to stepping back onto the track. As my turn arrived Raghav pulled in as fast as he could and whispered a few quick key pointers he noticed before I headed back onto the track. 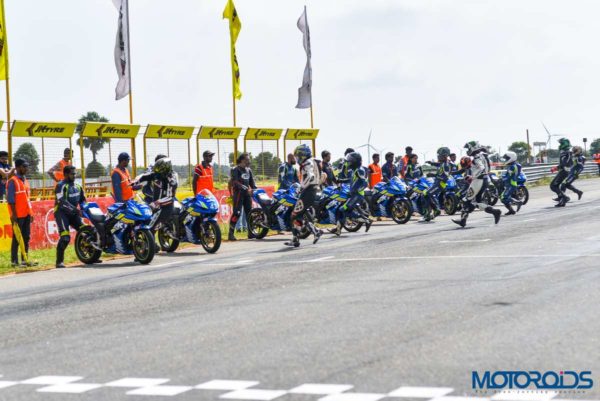 Remember all those things I said about the ergonomics earlier, yeah I immediately took that back as soon I got back onto the track. Turns out that practice & qualifier session really helped me build up to this race, by now I felt much more at home and my body had also better adjusted to the ergonomics. Now fully accommodated and having my tires all warmed up by my fellow racer, I was all set to take as many positions as possible. The key here is consistency, that’s what I kept telling myself as I leaned in from corner to corner, almost scraping my knees a couple of times. For a switch to happen, my partner must inform the marshall whenever he desires to make a switch, whereas I have the freedom to pull in whenever I please or if I find myself out of stamina. With my attention on the wall each time I fired down the straight way, the motorcycle-inspired sheer confidence and encouraged me to brake much later into corners. 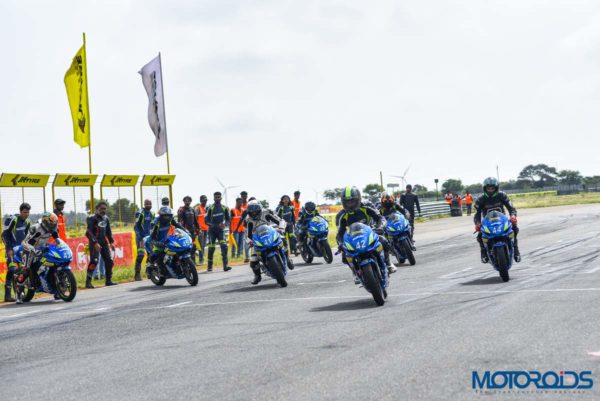 Along with that I also saw myself firing out of corners with an open throttle more often than before, where I kept cutting and modulating the power. Once you get a good feel of this motorcycle it’s quite involving to ride, however, the short seat was still a bit of an issue. I hope that Suzuki could incorporate a shorter cowl to accommodate taller riders. With my 20 minutes done on the track, I managed to reel in about four riders before I pulled into the pits and initiated a switch. Keeping in mind the pit lane speed is limited to 40 km/hr, I calmly rolled in as Raghav eagerly waited his turn. Him being the next rider, quickly got onto the track with the single aim to put the hammer down and make the most of every given second. After an adrenaline rushing race, we had managed to cover 36 laps and 63 kilometers in terms of distance. 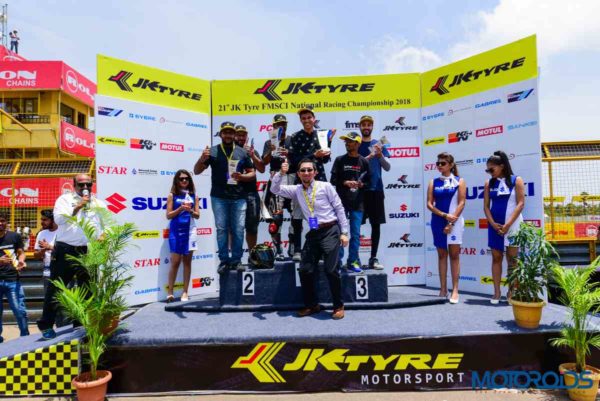 We were so thrilled to find out that we’d finished in 1st place and managed to keep a lead of about 51 seconds from the next team. Those 60 minutes weren’t as exhausting as I initially presumed but maybe that’s just the sheer adrenaline and excitement talking. I have done a few track days and this was quite a breath of fresh air. Endurance races manage to take your focus off the normal hardcore riding and let you focus on strategy and teamwork. I would have loved to have more track time as I was left wanting for more by the end of it all. It was a wonderful experience and we couldn’t thank Suzuki enough for having us participate and be a part it.