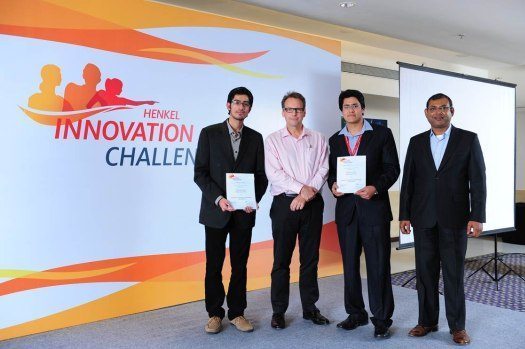 The 2o13 global finals will take place in Shanghai, China. Harsh Vardhan and Aditya will represent India in the finals which will be held from March18 to March 20 2013 this year.

The winning concept was based on the adhesives industry. The students calling themselves Radicals invented an illuminating adhesive. What clinched it was that the boys presented a sample of their proposed product giving a practical feel.

The National finals held in Mumbai saw an enthusiastic display of ideas and innovation from across cities. With students from IIM, IIT, NMIMS and other renowned colleges the competition was one that had the most excellent minds vie against each other for a spot in the global finals. 10 teams creatively presented their unique ideas in keeping with the theme this year – “Triple the value you create. Create a sustainable world”. The 10 teams that made the mark this year in India were shortlisted from over 800 registrations.

Speaking on this year’s competition, Mr. Jeremy Hunter, Country President, Henkel India said, “Henkel strongly believes in facilitating aspiring students to bring out their creativity and channelize it in the right direction. Our theme this year aligns with the global requirement for a sustainable change compelling students to think beyond.”