Home News Spy Pics: 2011 Ford Explorer – No not the teaser from Ford! 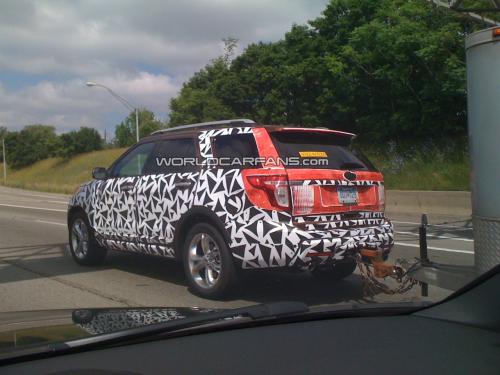 Ford had been playing some kind of a game with its 2011 Ford Explorer by sharing ‘n’ number of teasers of the car. Frankly speaking, the pictures seemed to be teasing fanatics and customers who were eager to see what the 2011 Explorer would be like. Which means, the teasers revealed exactly nothing. However, we stumbled upon a few more teasers. However, these teasers aren’t sourced from the Ford official photographer, but come from the portal called World Car Fans. And to be frank, it’s no more a teaser, it is a Spy picture!

The new car features a beefier edge and a Ford Fusion inspired set of tail lamps. The car also features a roof-mounted spoiler, flared wheel arches, and a dual-exhaust system. The front of the car boasts of a five bar grille and projector beam headlamps accompanied by large sized fog lamps.

The car will be driven by a choice of two motors – a 2.0-liter EcoBoost four-cylinder and a 3.5-liter EcoBoost V6 with 355 hp (265 kW / 360 PS) and 350 lb-ft (474 Nm) of torque. No more details regarding the engine could be squeezed out, however the firm had mentioned that the the 2.0-liter EcoBoost will deliver “best-in-class fuel economy and V6 performance.”