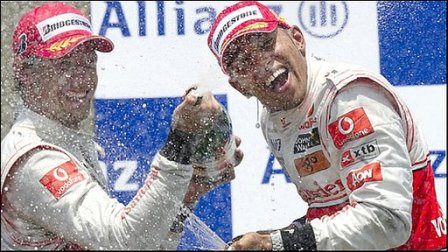 Canada F1 GP, pre-race I had predicted that the Mclarens will fight the Red Bulls again. At the end of this season, we might just look back at Canada as the turning point of the championship. McLaren beat Red Bull Racing on raw pace and race strategy and my fellow iSporter did predict Mclaren will win! After dominating qualifying for the first 7 races, the Red Bulls were finally beaten to pole position by Lewis Hamilton on Saturday. He continued his dominance in the race with a perfect start and unbeatable pace. In spite of losing the lead many times owing to the differing tyre strategies, McLaren’s superior pace and better tyre choice ensured that he was never really going to lose the race.
On a track that was very hard on the tyres in cars that were harder on the brakes compared to previous years, the most flamboyant and aggressive driver on the grid came out on top of his smoother and softer-on-the-car team-mate. I’m sure even Jensen was surprised by Lewis’ ability to drive a car on un-drivable tyres. His final qualifying lap was stunning at the least, later described by Button as “Phenomenal. I couldn’t touch him”. And the slow-motion replays in the closing stages of the race showed the tyre-wear on Hamilton, Button and Alonso’s cars. Hamilton’s were the most worn, with Button’s being the least. Yet, their lap times weren’t that far apart.
Lewis was quicker than Jensen for most of the race, only going slower when he hit traffic, and his tyre-wear didn’t seem to make him back-off. While Vettel, Webber, Alonso and Button were spacing themselves out for their tyre strategies to play out, Hamilton was just driving his own race. It was the same Lewis who shot back at his team a few races ago when he was asked to save fuel and tyres. It was the same Lewis whom many (including me) have criticized in the past for being too aggressive without bothering about the car. Well, he seems to have shown us that if you’re that fast, the rest of it doesn’t matter.
Hamilton lost the race lead to Fernando Alonso in the first pit stop, with the two of them exiting the pit-lane side-by-side. Alonso came out ahead, but lost the lead a few laps later. Both McLarens got past the Ferrari of Fernando Alonso with some help from the back-markers. While Ferrari finished on the podium, they have much to ponder. It did seem early on that the McLarens’ tyre choice was wrong when they pitted early and lost track position to Red Bull and Ferrari. But as the race wore on, and Webber and Vettel struggled through traffic and tyre-wear, it was clear that they (McLaren) had made the right decision.
Looking ahead to the European GP, McLaren will arrive with the lead in both championship and an equal (if not faster) car. But both Red Bull and Ferrari are expected to have major car upgrades and we can’t say for certain that McLaren is now the team to beat. But it does look more and more likely, that with a close to perfect car, Lewis Hamilton need not worry about his team-mate anymore.