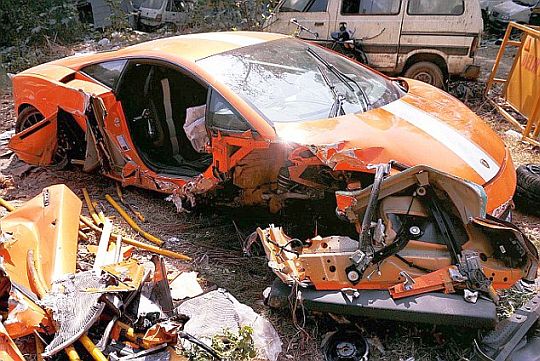 Only yesterday, we talked in detail about a recent crash in Delhi. This crash involved a Lamborghini Gallardo LP 550-2 Balboni in hands of 28 year old Anukool Rishi, son of P A Rishi, Chairman, MVL Limited. The accident claimed the life of Anukool, who was thrown out of the car in the high speed crash. It is being reported that the driver was NOT wearing the car safety belts. This car had also hit Krishan Lal, a cyclist who has been left partially paralyzed.

Now, a report in Times of India states that many companies selling these high end sportscars have been conducting orientation programmes for their customers on the “right way” to drive. Exclusive Motors, the importer for Lamborghini, Bentley and Bugatti, as well as for cars from popular and established manufacturers like BMW and Mercedes, says that safety and the need for responsible driving is talked about with customers from the very start of their ownership experience. “Orientation (on the product) is always there and we also conduct regular programmes for customers,” Satya Bagla, managing director of Exclusive Motors, told TOI.

We, at motoroids feel that this recent incident and a few earlier such incidents go on to show that while our country is gradually becoming home to such sophisticated and very powerful cars, the driving skills of their user leaves a lot to be desired. As the Spiderman says, ‘With great power, comes great responsibility.’, similar is the fact that it is high time that the drivers of these lethally powerful cars become more responsible for the safety of other road users and themselves.