Tata Motors has been working on two new models for the Indian market; one of which will be the much talked about Tata Kite hatchback, while the other will be this – a sub-4 metre compact saloon based on the same platform.

This is the first time that Tata’s upcoming sub-4 metre saloon has been caught in its full camouflaged glory. The spy pictures illustrate the compact saloon’s design theme and we think it looks quite interesting. Unlike other compact saloons in India, Tata’s new sub-4 metre car will boast of a fastback design. The images reveal a gently sloping roofline, which is a typical characteristic of a fastback design, and the car also gets a smart design for the alloy wheels. The front fascia of this compact saloon will likely be similar to that of its Kite (Glade) hatchback sibling, though the side and rear profile look noticeably different. You can also see the ‘makeshift’ tail lamp clusters that’s been fitted to this test mule. 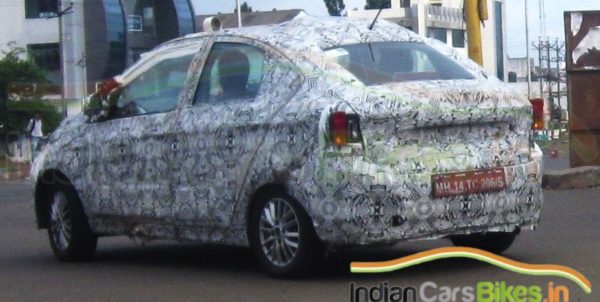 Both the Kite siblings are based on a ‘completely’ re-engineered Tata Indica platform. The carmaker claims that it has made significant improvements to the platform underpinning the Kite siblings. The new compact saloon from Tata Motors will be replacing the Indigo eCS, at least in the private car market. There is also a possibility of an e-clutch that may make its way into the Kite siblings. Powering the Tata Kite siblings will be a new 1.2-litre 3-pot petrol and 1.05-litre three-cylinder diesel engines. The Tata Kite hatchback will possibly hit Indian roads in the later part of 2015, while the Kite compact saloon will mostly be launched in late 2015 or early 2016.

Check out more spy images of this upcoming Tata compact saloon in the gallery below.