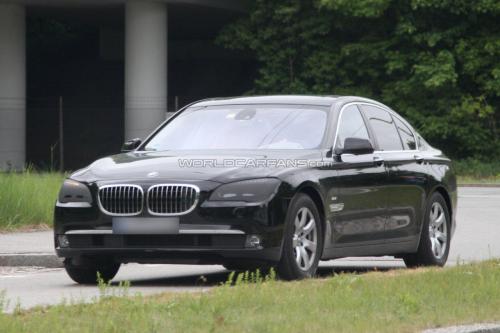 The 7 series sold in the international market is a good 3 years old. BMW has taken notice of this and are working on the face-lift model. Earlier we reported to you about the 2012 BMW 3 series spied, and it’s the turn of the flagship 7 series.

The new 7 series carries forward the majestic aura of the 7 series heritage, a new set of lights are expected for this Beemer as the head-lights are taped over and concealed. Maybe BMW is going to start a new trend by using a style for headlights which was earlier seen on the 2012 BMW 3 series. Finally there is a new LED strip on the indicator lights which seem to be new.

If there is any car that the 7 series should be scared of, well it has to be the new 2013 S-Class which was also spied. The S-Class appears to be more streamlined and matured in its look and has a CLS inspired headlight. There are alsotalks about the Hybrid version of the new S-class so expect a greener S-Class to also make its debut along with the standard one when it arrives on the horizon.

Which of the two cars appeals to you more?