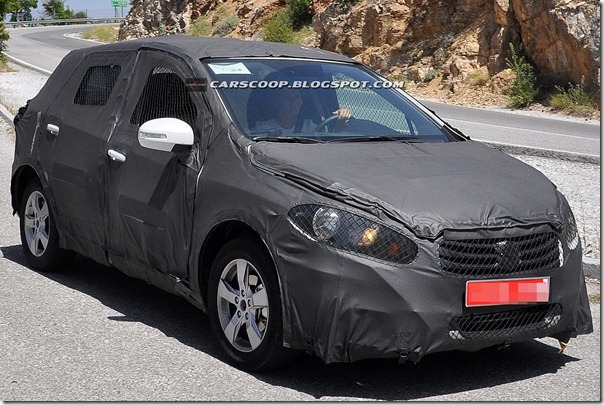 We so knew this was coming! It may be noted that the Suzuki SX4 is on sale in various car markets of the world. While most of the international markets have the SX4 crossover on sale, India got a sedan derivative of the same car. Those out there who wouldn’t like to have a Suzuki badge on their crossover have the option to go for the Fiat’s version of the same car- the Sedici. It may be noted that the SX4 has been co developed by Suzuki & Fiat and the car was designed by Italdesign Giugiaro Studio.

The car has been in the market since some time now (2007) and is due for a replacement in near future. The fact that the car never did well in India and MSIL needs to inject a lot of freshness into the brand is another story that is linked with this one.

Spy shots of next generation SX4 being tested have surfaced on the web world and it can be safely predicted that the car will be unveiled sometime next year.  ‘Insiders’ say that the car’s styling will be heavily influenced by that of the flagship Kizashi sedan and the five-door SportBack variant should spawn a sedan soon after it greets the world at Paris Motor Show next month. On the inside, the car will sport styling cues from both the Swift and the Kizashi and safely expect the Japanese auto maker to make use of more premium marterials.

Save for being a rival to the 500X and the Linea (and maybe borrowing the Multijet), the new SX4 will have nothing to do with Fiat. The new SX4 could be powered with new motors from Suzuki and the power output for the Indian version should be in tune of 110 bhp. Maruti Suzuki could also plan to bring a CVT transmission with the new sedan. The all new SX4 sedan should be here by the end of 2014.