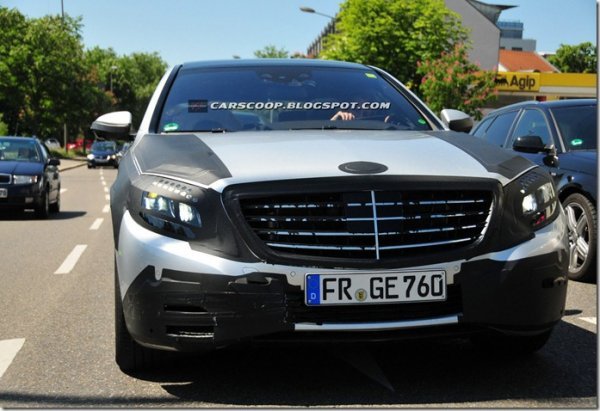 Mercedes-Benz was recently caught testing the next generation S-Class flagship sedan in Colorado, USA. The 2014 model of the mighty S (codename- W222) was also seen at the Nurburgring track. The new S should debut in mid 2013. This means that the car might come to us by early 2015. 2014 S-Class is new to the smallest of the details. Looking at the spy shots that keep cropping up on the web world, it can be said that the car continues to be almost similar in dimensions to its current gen model. The grille seems to be somewhat ‘in your face’. However, the design form of the grille remains to be typical Merc. So much that we wonder why did the German car maker even bothered to hide the insignia on this example of the new car. In side profile, the car is distinctively Merc and now has an even stronger character line. The interiors, from what we can make out, remain typical Merc affair but with a dash of sportiness injected to them. The car will debut with new age features like the belt-bag technology and advanced infotainment system that we have been talking about.  Safely expect the new S Class to come in many body styles like the Short wheelbase, long wheelbase and extra-long wheelbase. We are eagerly waiting to lay our eyes on the next Pullman. Powering the new S will be a range of V8 motors along with a V12 for the AMG version.