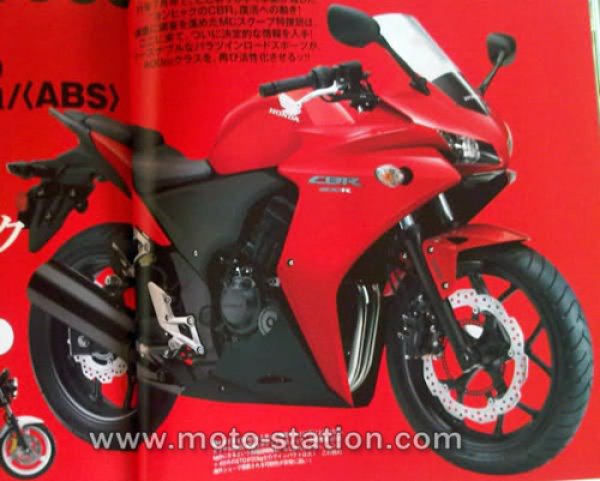 Only yesterday, we brought to you the first ever images of Honda’s brand new middleweight fighters – the CBR500 and the CB500. As can be made out from the names, while former is a fully faired sportsbike, the latter is a bikini faired streetfighter. The two machines are propelled by an engine which essentially is a combination of two CBR250R engines.Like we reported earlier, we have been informed that the bikes will be named as the CBR500H for faired version and CB500C for streetfighter version respectively.

Now, we have a clearer image of the CBR500H, which looks uncannily similar in styling to the CBR600RR. We really think that’s good news, as we aren’t really very fond of the new Honda design philosophy, heralded by the VFR1200, and taken down to the likes of the CBR250R. The guy who clicked this image says: “I work in the production facility managing product transtabulation and designer contrasderlation. With a splash of secretarial cunnilingusation at lunch time.
During the design process the team were focused on producing a comfortable, economical mid-ranged sports-tourer. The aim was comfort, with a sporting look. The rider is the customer, this bike will enable them to ride comfortably and economically for long periods, while not looking out of place when sitting next to a supersport at a stoplight. This product is blended perfection. Comfort, economical and sport-styled design, it will bring a smile to riders of all demographics.”

The bad news with the bike looking like the 600RR is that the latter is due for a replacement, which would mean that the CBR500 will start looking outdated at the very beginning of its life. Expected specs include a tubular steel frame, ala CBR250R. A single front disc and regulation forks suggest that this would be a bike built to a budget. Expect peak power of close to 45PS which should be able to propel this baby to 200kmph without much trouble.

About the bike maker’s plans for near future, the guy added: “3 bigger bikes, with at least two being this mid-engined faired and naked version will be released in Thailand in the coming months, we’re actually looking at the end of the year at earliest (at this stage). they will be released in Thailand first a la the CBR250R, other markets are still in discussion and will come later, if they are to be released there. I will be surprised if it isn’t global. There will be two, faired and naked. There is likely to be a third in the form of a CRF or similar. Think Er-6n, Er-6f and Versys 650, but in a different format.”

The CBR500H is expected to be built in Thailand. The 500cc bike is expected to be cheap, will have an engine that is made with two CBR250R engines joined together and will have Thailand as the motherland – all of which means that the bike has extremely high chances of the making it to our fast growing bike market.
Source: CBR250.net & moto-station.com