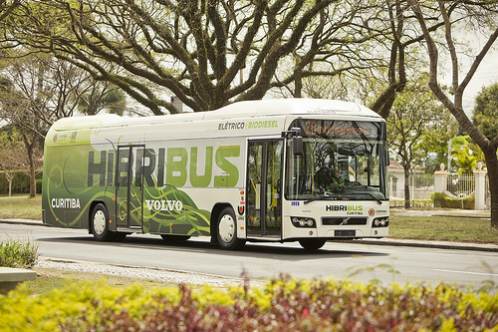 Volvo Buses has received its largest hybrid bus order to date. The city of Curitiba in Brazil has ordered 60 buses that generate up to 35% less fuel consumption.

Decision-makers around the world are recognizing the considerable benefits of hybrid technology in city buses. In recent years, Volvo Buses has sold hundreds of hybrid buses through its Volvo brand in Europe, Nova Bus in North America and Sunwin Bus in China.

The company has now also received its first hybrid order in South America. The city of Curitiba has ordered 60 hybrid buses for delivery from 2012.

“Several of the largest cities in Brazil and the rest of South America tested a Volvo 7700 Hybrid in 2010 and at the beginning of this year,” says Luis Carlos Pimenta, President of Volvo Buses in Latin America. “The tests were very successful and contributed to this first order, which we believe will be followed by additional orders from other cities.”

Consequently, Volvo Buses has decided to commence manufacturing hybrid buses in Curitiba. It will involve the same hybrid technology used in Volvo’s hybrid buses and trucks in Europe and which is currently the world’s most efficient for heavy vehicles.

“Volvo’s hybrid bus reduces fuel consumption by up to 35% and emissions of carbon dioxide by a corresponding amount,” says Luis Pimenta. “Other exhaust emissions decline by 80-90% compared with current levels in South America.”