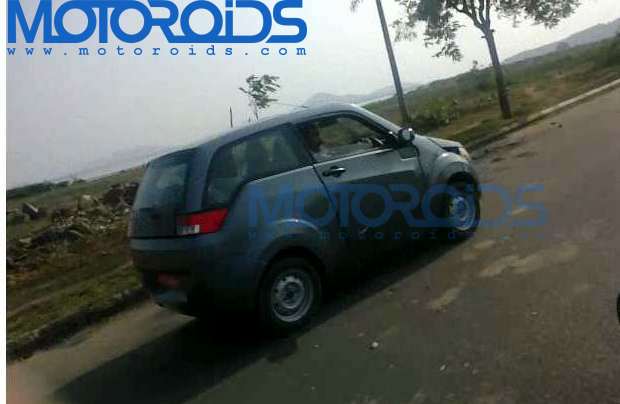 Mahindra has been working extensively on its next generation electric vehicle, the NXR. The new car will address all the problems that the earlier Reva (or the G-Wiz) had, like cramped interiors, low range and less top speed. Introduced to the world at the Frankfurt Motor Show in 2001, the car will be launched in 2012. Followed by an even more powerful and sportier version namely NXG in 2013.

Joy Sharma, our man in Chennai got the honours of being one of the first guys in India to catch the car in action. According to Joy, it was surprising the way this thing accelerated for an electric vehicle. Even while riding on one of the faster bikes around (the Yamaha R15), Joy and his friend had to accelerate hard to catch it. There was no sound emanating from the car except for the hardly audible whizz that all electric vehicles make as they move.

The REVA NXR would be made available only in a two door version, but with enough space to seat four adults. Years of development on the first-gen Reva would mean that the NXR would come with improved acceleration and range over its predecessor. The NXR reaches a top speed of 104 kmph while providing a range of 160 km.

Apart from its performance, the NXR also comes with some very innovative communication features to keep you updated about the battery charge and other critical info. The NXR is capable of texting you about crucial information such as Time-to-full-change, pre-heat or pre-cool the car, mail you a report on your driving habits or even unlocking the door as you approach.

The Reva also comes with something called REVive technology, which conserves a certain amount of charge only for emergencies and can be activated remotely if the primary charge has completely depleted.

For India, the company may replace the standard Li-ion batteries with lead-acid units to bring down costs. This would reduce the NXR’s range to 80km, and top speed to 80km/h.

The REVA NXR will be manufactured at the company’s new green manufacturing plant in Bangalore. The car is meant primarily for the European market, where the NXR Intercity (Li-ion) will cost about 15,000 Euros or a little more than Rs 10lakh. The Reva NXR City on the other hand, with lead acid batteries would be priced at about 10,000 Euros  or around Rs 7 lakh.