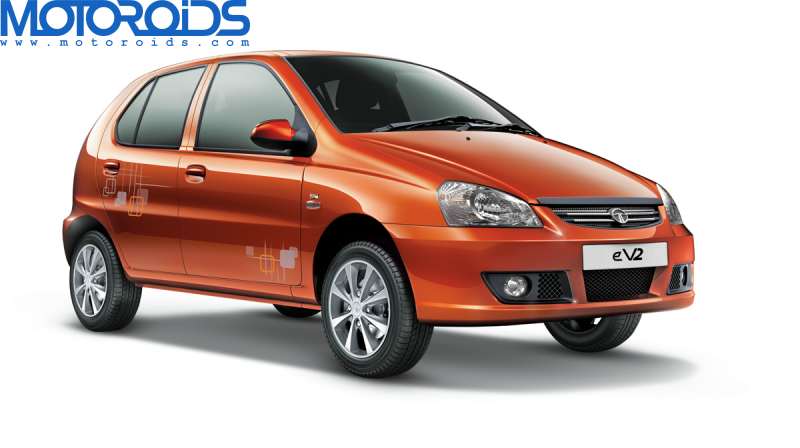 We Told you about Tata Motors planning to launch a new version of the Indica a few weeks back. We also brought to you the pictures and details of the car before its launch. Tata Motors have now officially launched the car. Christened the Indica eV2, the new Indica packs in  loads of features and boasts of housing India’s most fuel efficient engine under its bonnet. With an ARAi certified fuel efficiency of 25kml, the Indica eV2 has indeed written a new chapter in fuel economy.

The all new common rail diesel engine of the Indica witnesses a 32% increase in power and 46% increase in fuel efficiency over the earlier mill. The car also gets redesigned interiors and a host of new features. The Indica eV2 is also available with an MPFI petrol engine.Both petrol and diesel engines are BS4 compliant.

The new CR4 CR4 Common Rail Diesel engine with displacement of 1396 cc delivers peak power of 70 PS @ 4000 rpm and peak torque of 140 NM at a lowly 1800-3000 rpm. The company has also altered the gear ratio and reduced the weight of the car by around 10kg for better fuel efficiency and acceleration.

According to Tata Motors, the high fuel efficiency in the new CR4 engine has been achieved via following three technologies

3) DRAG REDUCTION – Redesigned wheel arches and subtle alterations on the exterior combined with a lighter shell and engine have collectively contributed to making the car more aerodynamic, reducing the drag coefficient.

Apart from its new engine, the Indica eV2 is home to several new and innovative features. First is the ‘Auto Drive Assist’ which prevents the driver from stalling the car even while releasing the clutch accidently on steep inclines. Several times, while climbing up steep inclines we have to modulate the clutch and the accelerator with such finesse at slow speeds that the engine stalls. This won’t happen with the new Indica though, and you could be sure that you won’t ruin your car’s rump and the front bumper of the car behind while ascending steep inclines at slow speeds.

Another innovative feature is to prevent re-cranking while the engine is still on. Modern engine are so silent and smooth that we sometimes don’t realize that the engine is running and twist the ignition key accidently. The eV2 will require you to have the clutch fully engaged if the engine has to be cranked up, eliminating the chances of re-cranking a running engine.

The car comes with a warranty of 24 months or 75000 km whichever is earlier.