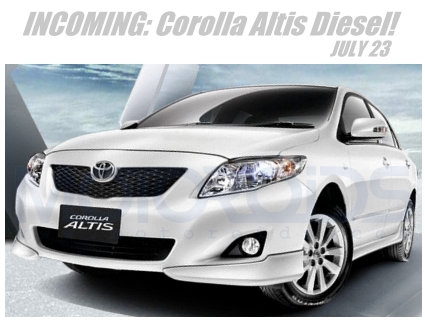 A few days back we told you about Honda’s plans of rolling in the diesel variants of some of their popular models due to the rising competition from diesel cars in the market. Well, now they have one more (and probably the biggest) reason to hurry things up with their diesel launches. The Honda Civic’s arch rival the world over, the Toyota Corolla, is finally ready to unleash its diesel variant across the country in less than a  month’s time!

Yes, the Corolla Altis will now come with a frugal diesel engine that will not only decrement the Civic’s sales further, but will also take a serious fight to Skoda, Volkswagen and Chevrolet with pros like ‘cheap’ and ‘reliable’ backing it up. From what our sources tell us, the Corolla Altis diesel will be powered by a 1.4-litre D-4D engine. The engine is good for 90 PS which is dialed in at 3,800 rpm. The 205 Nm or torque is spread across 1,600-3,000 rpm, meaning the Altis technically won’t sweat when trotting through traffic. To take on the likes of the Laura, Jetta and the Cruze, a 2.0-litre diesel would have made more sense, but from what we are told, the engine mountings for Altis would need a complete repositioning for that engine, thus increasing costs. The 1.4-litre D-4D mill on the other hand, comes from the Yaris and apparently fits into Altis’ engine bay without much hassle. The engine will be mated to a 5-speed manual gearbox and it seems Toyota has no plans of introducing an automatic variant anytime soon. According to our friends at Team-Bhp, the Altis diesel has acquired an ARAI fuel efficiency figure of 21.43 km/l which is a phenomenal feat for a car of these proportions.

The 1.4-litre D-4D diesel engine that will power the Toyota Corolla Altis

The exteriors are expected to receive minor tweaks to distinguish the diesel and petrol variants. If what we are told is true, the Altis will get a mesh grill (refer to the picture) instead of the horizontal chrome grill that the petrol variant comes with. The car, as we mentioned earlier, will be launched on the 23rd of July and is expected to cost Rs. 90,000 to 1-lakh more than a corresponding petrol variant. Stay tuned as we bring you more info on this news…