Following earlier reports of Porsche’s Macan SUV making its way to our shores sometime in 2014, new information has surfaced claiming that a handful of Macans have found their way into the country, suggesting an imminent launch. 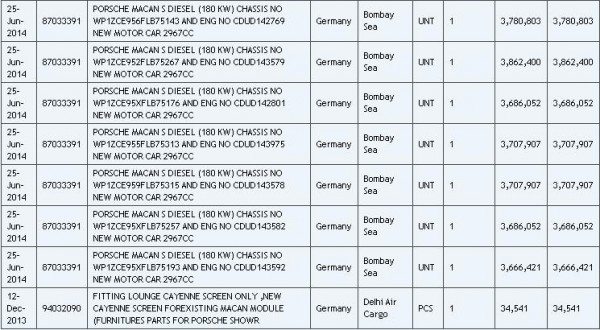 The above screenshot from a popular import export data tracking website shows that Porsche has imported a batch of Macan S diesel variants in India very recently, at what seems like mouth watering prices. But rest assured, these prices are before import duties and other taxes are slapped on. But still, these figures shall reflect real world prices once declared.

The Macan S diesel variant is powered by a 255hp, 3.0-liter V6 turbo diesel engine, and it should be the ideal money spinner for Porsche in India, just undercutting the Cayenne diesel.

Porsche unveiled the Macan last year at 2013 LA Auto Show and will be available in 4 variants- the base Macan, Macan S, Macan S diesel and the range topping Macan Turbo.

Thanks to Mvkss Sandeep for the tip off!