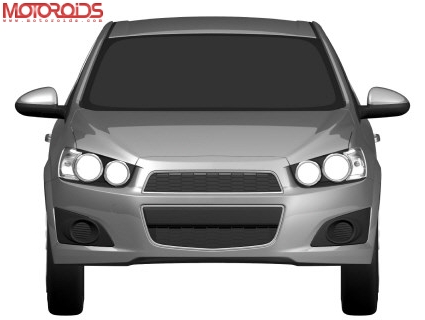 What you can see here are rendered images of the 2011 Cherolet Aveo U-VA hatchback and the Aveo sedan. These renderings were recently presented by Chevrolet to the European office of Registration. Both the cars are now restyled to reflect the new design language that Chevrolet is now following. The Aveo U-VA is quite similar to the Aveo Concept (refer to the gallery) showcased by Chevrolet at the 2009 Detroit Motor Show. The U-VA’s tailgate takes design cues from its younger sibling, the Chevrolet Beat while the front end looks like a scaled down version of the Chevrolet Cruze’s front fascia. Both these cars will come to India by Q1 2011 and will replace the current models. The current Aveo U-VA and the Aveo sedan are facing falling sales for quite some time and though the vehicles are potent performers, they have not been able to hold their ground against the fierce competition around. The new design and better engines should do the trick for the Aveo U-VA and the sedan just the way it turned the fortunes of the boring Optra with the new Cruze. Both the cars are expected to make their public appearance at the 2010 Paris Motor Show. Stay tuned as we bring you more info on the engines and other technical bits as and when we have them. Don’t forget to check the gallery on the next page>>>