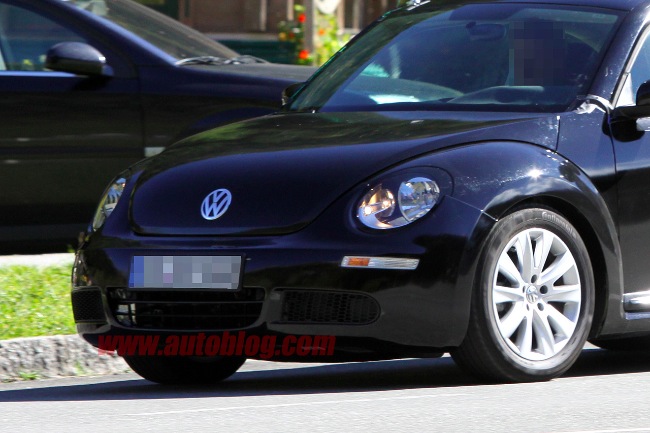 What we have here, are the first pics of Volkswagen’s newly re-designed 2012 Beetle, spied in the U.S by the folks at Autoblog.com. From the pics, the new Beetle looks more like the classic Beetle, a little less bubbly and a little less feminine. The roofline has lost its perfect arc, bringing a more aggressive look to the new Beetle; the hood seems to have been stretched and the windshield stands a bit more upright than the current Beetle. However, the headlights, tail-lights, front and rear styling remain unchanged from the current VW Beetle.

Under the hood, the engine specs are likely to read a 2.5 litre Inline- five or a 2.0 TDI motor. But according to sources within Volkswagen, the next- gen Beetle is expected to don a powerful engine- something which you can take to a race track; as reported by Autoblog.com. The car is expected to make its first public appearance in Detroit or Geneva Auto Show to be held in the first quarter of next year.

To view more pics of the 2012 Volkswagen Beetle, Click Here.