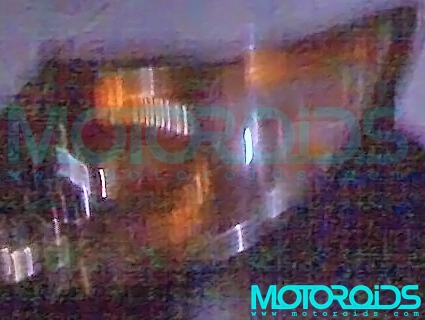 We are celebrating our first birthday today and within the last one year we brought you tons of scoops, spy shots and inside info on a lot of upcoming vehicles. One of our biggest catches in this one year was the new 2012 Tata Safari which we caught on test in October last year. It stirred up a lot of discussions and speculations about what the new Tata Safari would look like and how Jaguar-Land Rover would play a role in the development of the new Tata Safari. The earlier prototypes clearly showed off the Land Rover inspired boxy design of the new Safari.

What we have here now is an exclusive photo of the 2012 Tata Safari without any camouflage on the front end! The photo shows the same boxy lines for the front end that we talked about earlier. The new headlight design is a major departure from the current model’s design with a swept back look that incorporates a projector beam unit and an orange accent for the clear lens turn blinkers. The bonnet is flat with subtle creases and contributes towards the Land Rover inspired front end of the new Safari. The boxy theme is further complemented with the flared wheel arches which now have edgier lines as compared to the current Safari’s design. The prototype caught testing in this photo uses the same wheels as the Tata Aria which is slated for a launch on the 11th of October.

Inside the new 2012 Safari are plush new interiors with an integrated entertainment system with steering wheel controls, satellite navigation, seating for seven adults etc. The 2012 Safari will also get new creature comforts and safety features like light sensing automatic headlights, rain sensing wipers, cruise control, ABS, EBD, curtain airbags etc. Under the bonnet, the 2012 Tata Safari will get the same 2.2-litre DICOR diesel engine but will be in slightly different state of tune as compared to the Aria and the current Safari. The new Safari is expected to debut by early 2011 and is expected to cost between Rs. 8 to 13-lakhs depending on the variant. Stay tuned to Motoroids as we bring you more info on the 2012 Tata Safari as and when it is available to us.