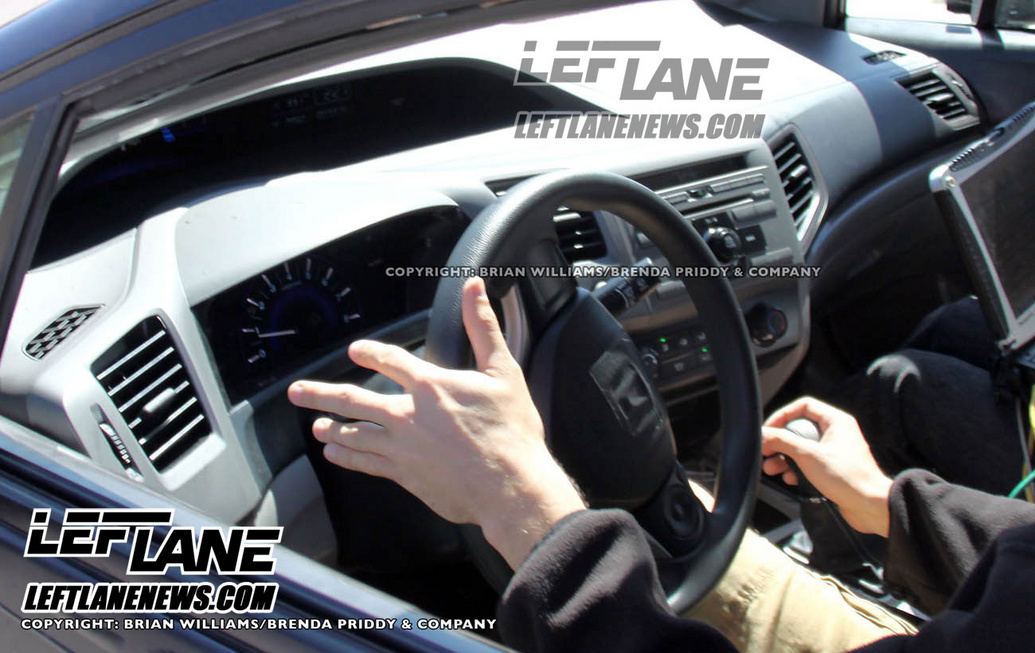 Left Lane News has now got their hands on the interior shots too of the 2012 Civic! The new dashboard, as seen in the pics, is an evolution of the current model’s dash. It still follows the same stacked up design for the digital speedo and tacho with a blue back-light theme. The major difference however comes in the form of the new ‘centre’ console which is now tilted towards the diver in a bid to attain better ergonomics. The passenger too gets a pair of A/C vents tilted towards the passenger seat. The steering mounted controls too have a new design, as can be seen in the spy pics.

Update 1 (21st September 2010):
The spy photographers are at it again! The Civic sedan has been caught on test yet again and this time around there is one shot of the car with the door open. While there is nothing too revealing about it, the inside door panel shows off the probable curvature of the dashboard. Stay tuned as we bring you more updates on the 2012 Honda Civic heading for India.

Here’s what we posted earlier:

After a slew of spy shots of the European Civic hatchback being tested in Germany, the interwebs are now rife with photos of the 2012 Honda Civic sedan caught on test yesterday in the US. The Honda Civic that is sold in India is the same model that Honda retails in the Japanese market. However, the significance of the US model is that both, the Japanese and the US models are based on the same chassis, share almost the same engine options, but boast of slight differences in the design/styling department.

The Civic sedan caught on test here shows hints of a design that takes heavy cues from the Honda FCX Clarity. To us Indians though, the car will appear to be an evolved version of the current generation Honda City. The new Civic looks quite similar in form to the current model, however, the front fascia has traded the curves for a sharper nose to gel with the ‘Arrow Shot Form’ design language of the newer Hondas. As we reported earlier, the new Civic will be slightly smaller in size than the current generation model. Honda will still pack in more cabin space using the same design tech used in the new Honda City. Continue Reading>>>

Though the spy photographers haven’t released any shots of the interiors yet, it is pretty evident that dashboard is an evolution of the current model’s space age design with lots of digital displays here and there. To cope up with the stiff competition around Honda will look at introducing more safety features and creature comforts to the Indian version of the Civic. While there is no word yet on the engine options, we expect a re-tuned version of the 1.8-litre iVTEC mill to be offered during the new Civic’s debut in India by mid-2011. We expect the diesel version to join in by early 2012 to take on the new diesel avatar of its arch-rival Corolla and the new kid on the block – the Chevrolet Cruze.