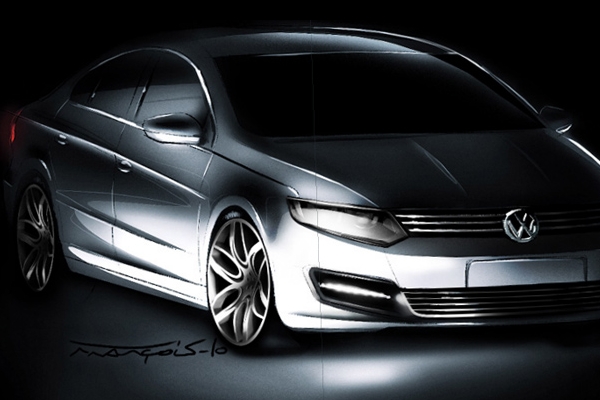 The first artist sketch of the 2012 Volkswagen Passat CC has made its way onto the internet. Likely to be based on the new 2011 Passat which will be unveiled at the 2010 Paris Motor Show, the new CC is expected to debut in mid-2011. If you have been following the evolution of the Volkswagen vehicles in recent times, then you’ll relate to the Passat CC’s new design which, like all the recent VWs, takes inspiration from the Scirocco’s design language. The sharper front end, though common now on every new VW car, manages to look a lot better than the fascia of the current Passat CC.

However, the current Passat CC itself looks much better than the drab Passat sedan which is hardly selling for VW. We posted a blurry photo of the 2010 CC on test near the Mumbai-Pune highway a few days back. Now we have managed to get a scoop video of the same car doing the test rounds on the city roads in Pune. There is no camouflage whatsoever on the car. But before we could pass it off as just another powertrain-testing mule, we got in touch with our sources close to VW who revealed the Volkswagen is indeed testing the Passat CC for India. A few of these models could be sold here to introduce the sub-brand to the Indian market and create some buzz before the new model based on the sketch above goes on sale in 2011.

Video of the 2010 Volkswagen Passat CC caught on test in India: